While I'm getting ready to spend Christmas in London, here's one from a previous year ...... 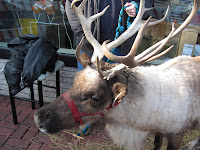 Noel and Blitzen Junior, in their scarlet halters, were standing outside the Hobby Shop, patiently letting little kids pat them, or even pet them, as Americans say.  It was my first close encounter with a reindeer and I never realised how small they are – small but perfectly formed.  Noel and Blitzen and their seventy brethren live at a reindeer farm near Buffalo and their diaries get full at Christmas time.
The Hobby Shop was refreshing - a taste of what Christmas must once have been like here. It was full of traditional toys, like dolls’ houses, toy soldiers, farm animals and those authentic aeroplane kits. In the centre, model trains chugged around perfectly designed miniature townscapes, including that ubiquitous law firm, Dewey, Cheatem and Howe, which made hubby chuckle.
It was refreshing because it’s easy to get cynical about the public side of the American Christmas with its synthetic cheer, especially when it’s subsumed into one long end-of-year pleasure-fest, starting with Halloween. In these politically correct days, this collection of celebrations is all lumped together as “The Holidays”.  Perhaps even “The Holidays” is on the way out;  I spied some wrapping paper with “Happy Winter” on it. There doesn’t even seem to be a special Christmas food that unites Americans. Turkeys are for Thanksgiving. If they survive that, they can mostly relax. Many of our friends and family go for roast beef and Yorkshire pud  for Christmas, although they have been known to eat something they call Minced Meat Pies.
And even if your ultimate Christmas spiritual experience is shopping, it’s hard to find anything original. Well I’m talking about our neck of the woods. It’s probably very different in the glitzy cities. I suppose, in western New York, where cash isn’t too plentiful, people get what they want to pay for and like things to be predictable. The other day, I was in Rochester. It’s about two hours from us - one of those northern cities full of gracious old buildings now fallen on harder times.  Rochester’s downtown is no longer a place you’d particularly want to stroll around. Most shopping these days happens in out-of-town “malls”.  I entered one and I could have been anywhere. The same stores, selling the same stuff, to the same formula, the same stands touting the same joke calendars  and the same dubious piped music. It’s no good trying to rush out before “Walking in a Winter Wonderland”;  it’ll only catch up with you at the next place along. 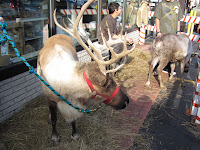 Evidently, reindeer are this year’s must-have accessory. Here in the mall, they bobbed their heads, rhythmically up and down, fluttering black eyelashes, surrounded by fake snow and fake presents and empty, echoing spaces. – well it was Monday morning.  Fortunately for them, they were fake too.


OK, that’s enough of that. Yes, it’s easy to be cynical but somehow,  especially in our rural backwater, my American friends still find ways to cut through the commercialisation and the political correctness and get to the soul of Christmas. I love the way so many people put crib scenes, or crèches as they call them here, in their front gardens for all to see.  I love the way the garage attendant (yes, they still fill up for you here) pressed a little red-and-white candy cane into my hand along with the receipt. And in another store in another mall, I met an old boy shopping, trundling himself around in one of those electric chairs for the disabled. It was festooned with tinsel and words like “peace” and “hope”. At his feet reposed a small, cloudy-eyed beagle.  And no, he wasn’t collecting money. The man gave me the sweetest smile,  “Her name’s Patches”, he said, “You can pet her if you like.” 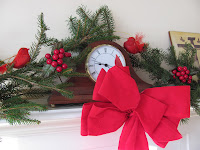