Who's this Mrs Claus, then?

The cherry-pickers have been making their way down our village street, putting up Christmas-I-mean-Holiday decorations. The results are mixed but they do their best. 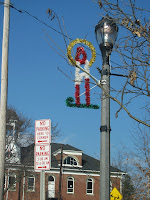 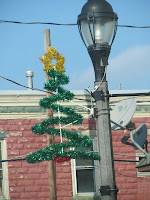 Here, out in the sticks, we are a little limited as to Christmas entertainment.  True, they are putting on the Messiah at St Mary's Church, which is a rather splendid twin-spired building with magnificent stained glass and unlike many American Catholic churches hasn't been, as they say here, wreckovated.
And there's always the Santa Claus Lane parade through town,  which has plenty of Christmas spirit – although whether it’s really the sort of Christmas spirit you would want to pass on to your children  is debatable. It’s  mainly a boost for the benighted shopkeepers and an excuse to get people out and buying as much stuff as possible. But it does include guest appearances by "Santa and Mrs Claus".
Wait a minute. Mrs Claus? I never met her in Britain where we always assumed St Nick was a Bishop and his alter-ego Father C,  a bachelor. But she's alive and well here. 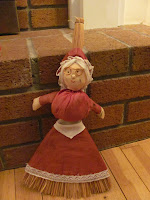 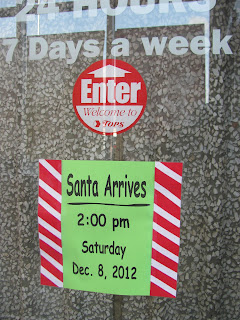