On Dressing for the Archbishop

I must say that another London plus is being able to wear heels and a pencil skirt and not look silly. In our Western New York locality, women who wear skirts tend to be members of obscure religious sects, or viewed as such. It's trousers day in and day out, even for the extremely circumferentially challenged and it gets boring after a while.  New York City is different of course but we are not New York City. 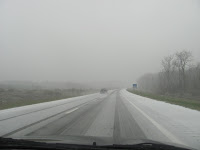 Mind you, when your usual route to the shops involves driving through ice and snow, there's not much call for elegant apparel. Especially if you might get stuck in a snowdrift. I very much indentify with the Renee Zellweger character in the film "New in Town",  who shows up in the dead of winter in some back-of-the-beyond one horse town in Minnesota, wearing stilettos and a sharp suit and staggers straight into a blizzard.
But with London under the current arctic conditions, I am missing the long, bulky, down-filled coat which I bought because they swore it would keep even "hockey moms"(sic)  watching their kids' ice hockey games warm. I decided not to bring it and it serves me right for being a fashion victim.
At yesterday's 80th anniversary service for my old haunt, the BBC World Service,  I came out of St Martin-in-the Fields with my teeth chattering.  It was good, though, to see so many old friends and to hear the soon to be former Archbishop of Canterbury (I didn't dare ask him if, in view of all the current controversies, he was relieved to be getting out)  extolling the virtues of this august organisation. It's good to be reminded, when the BBC is getting so much stick, of how the WS has been a lifeline for so many citizens of suffering countries through the years and of the journalists who risk their lives reporting the truth. Sad, though, that the World Service has been pruned of so many of its foreign language sections and especially sad that it's no longer based at Bush House. I didn't want to go and see the building now that everyone's moved out to some futuristic minimalistic hub. I prefer to remember the smell of those studios, the stairs and labyrinthine corridors echoing with history and the lifts and canteen where you were never short of an interesting conversation.
Interesting too, that the local Buffalo radio station carries the World Service News. I was in a plane once, sitting next to a Buffalonian, who jumped up and embraced me when she heard I'd worked for the BBC. Of course, when you know the American media, you can understand that well enough.
Posted by Alenka at 1:16 PM