Spare a Thought for the Buffalo Bills 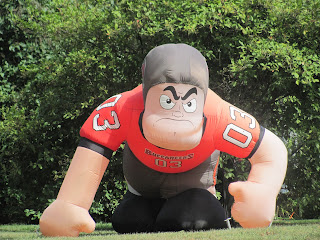 They love their sport here - all those local teams, the Huskies, the Lady Gators, the Bonnies, all ages and all kinds of sports, basketball, football (sic) , soccer (football), right up to the big shots - the Buffalo Bisons (baseball), the Buffalo Sabres (ice hockey - currently on strike).....and then there's the Buffalo Bills.
Now  I don’t quite share the American people’s enthusiasm for their brand of football.  I really can't understand why they call it football.  So far as I can see, it's just a bunch of men with grotesquely padded shoulders standing around waiting for the TV commercials.
But for all my scepticism, I do have a soft spot for the Buffalo Bills.
Buffalo, an hour and a quarter away on the shores of Lake Erie, near the Canadian border, is western New York’s main city, with some beautiful old buildings and churches and a citizenry reputed to be some of the nicest folks in America.  At one time among the most prosperous cities in the country,  Buffalo is now in sad decline.  Buffalonians may have lost many of their great industries and a large part of the city’s population but at least they’ve still got the Bills.
Their support, mind you, could be called the triumph of hope over experience.  And this season looks like being pretty well par for the course. Five games won out of eleven so far and the season ends at the end of the month.
That’s not to say that the Bills are nonentities. Rather like England football supporters,  Bills fans look back to the glory days of the sixties,  when their team  won championships and had great players like Cookie Gilchrist. When he died not so long ago, the "Buffalo News" described him as “a man who ran like a freight train on the field and was larger than life off it”.
The glory days nearly came back in the early 1990s, when the Bills played in four consecutive Super Bowls (American football's equivalent of the Cup Final) – the only team ever to do so, Buffalonians proudly point out.  Only they lost all of them.  The most infamous occasion in the Bills’ recent history came in the 1991 Super Bowl against the New York Giants,  when a player called Scott Norwood managed to snatch defeat from the jaws of victory by narrowly missing a potentially winning field goal in the last seconds of the game.  Still, when the team returned to Buffalo, the fans were out in force at the airport with placards saying, “Scott We Love You”. That’s how much the big-hearted Buffalonians love their Bills.
But the shadows are lengthening over the Bills’ stadium. Their owner, Ralph Wilson, has vowed not to sell the team in his lifetime but he’s now 94. Bills fans are dreading the evil moment when their team is sold, perhaps to someone outside Western New York,  perhaps even, horror of horrors, to a Canadian.  American professional teams can be moved hundreds, even thousands  of miles at the drop of a hat.  It’s all about the money.
Bills fans are dreaming up schemes to try and keep their beloved team in Buffalo. If a friendly local purchaser doesn't show up, it’ll just about break Buffalo’s heart.