We Get Lucky Again

Considering the snowstorms battering this benighted country, we had a remarkably trouble free journey back from London. The big one hit Western New York yesterday morning and the early flight from our first staging post, Washington Dulles, which we weren't intending to take anyway, was delayed for hours while they got Buffalo airport clear. Some people, we were told, had been waiting since the previous afternoon. But ours was only delayed an hour or so - pretty good going by American winter flying standards.
So it was welcome home to Buffalo Niagara International Airport, with something nice to look at while we waited for luggage. I'd really like to know why that wait's always so long. 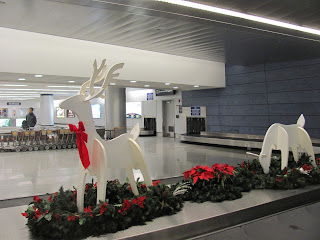 There's now a frisson about landing in Buffalo in winter. It's nearly four years since a turbo-prop Colgan Air Dash-8 fell out of the sky in a snowstorm while approaching to land, killing 49 on board and one on the ground. It wasn't the airport's fault. Buffalo is all there when it comes to snow but it was put down to the tired and poorly-trained pilots who made tragic mistakes.  Plenty of these small airlines service local routes, sub-contracted by the big boys. If you stop and think too much when flying in America, you'd never do it. 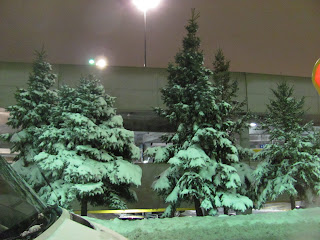 A Christmassy scene outside the terminal and signs of much snow-plough activity earlier in the day. Good, we needed the car for an hour-and-a-half journey home. 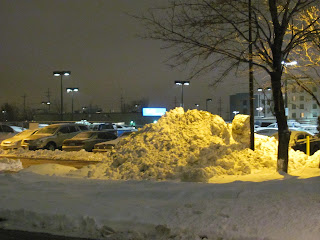 On the flight, a full moon had lit up the night clouds under us in a spectacular show. Here and there, through gaps in the pale grey blanket, we glimpsed the twinkling lights of earth -  like a box of jewels peeping through cotton wool. Sadly the little Embraer jets don't have room for much hand luggage and my camera had been gate-checked. But it wouldn't have done the scene justice.  Best just to remember.
Posted by Alenka at 11:03 AM