Squirrels and the City 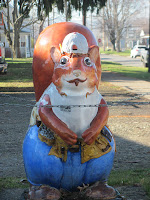 Londoners like me might remember when London was suddenly invaded by a herd of  lifesize, fibreglass painted cows.    Now, everyone's jumped on the bandwagon.  London and Chicago had cows,  Florida towns have dolphins and turtles, I drove through a place with turkeys, Buffalo had buffalos and our local town, sorry, city of Olean, (pop 16,000), not to be outdone, has …….. 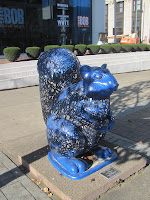 ...squirrels. Why squirrels, you may well ask. Well, for a start,  there are thousands of them here.  I’m always swerving as a street-crossing squirrel changes its mind for the fifth time. They sashay along telephone cables and scamper up and down trees, when they’re not chewing people’s wiring.
So someone decided it would be a wonderful idea to promote Olean by putting up four-foot-high squirrels in different designs all over town, painted by local artists and sponsored by local businesses (no tax dollars involved). It would, as they put it, encourage tourism and “foot traffic”,  in other words getting Americans to walk, which is an uphill task. The idea was that people would stop and look at the squirrels and their eye would fall upon one of the few downtown shops left open and they would go in.  The jolly rodents would “capture the essence of life in Olean”. 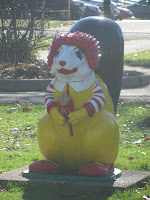 In the down-to-earth, pickup truck driving, old-fashioned farming community which surrounds the town, such an arty idea met with a bit of scepticism at first. Squirrels don’t have that positive an image around here, except when it comes to shooting them. You can imagine the sniggers at the town council meeting. ”You want to put up WHAT?” For a time, Olean was Western New York’s laughing stock.Squirrel City. Ha! One of the city’s aldermen ventured that he and his family had just been to Vermont and seen a model moose, which people kept stopping to look at. But a SQUIRREL?

Operation Squirrel nevertheless persevered and there are now brightly-coloured fibreglass squirrels positioned all around town. 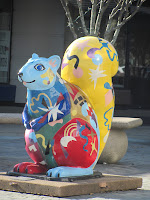 “This project,” said the County Arts Council in a nice bit of Americanese, “is engaging local people in meaningful debate about change, the nature of creativity, and the future of Olean’s main street.”
Whether it's had much effect on either shopping or tourism, I couldn't say. They would have done better not to have pulled down half the picturesque main business street and the old, gilded theatre in the interests of urban renewal.
But over the course of a few years, we've had Florence Squirrelingale and Sleep E squirrel, at the hospital (sponsored by a group of anaesthetists), A Knight to Remember,  by Armor Building Supply (get it?) J.R. (outside a company that works with the oil industry), the inevitable Ronald McSquirrel and many more.
Recently I've noticed a dapper Polish officer guarding the Pulaski Club, complete with sword, twirly moustache and a Polish eagle on his tail. Pulaski being a Polish general who fought on their side against ours in the Revolutionary War and once saved George Washington's life.  No comment. 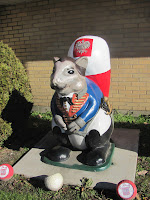 Sadly, though, my favourite is no longer there. Sir Pennywise used to sit outside the Community Bank. He had a top hat, pince-nez perched on his snout, white spats and carried a money bag.  One of our brighter local citizenry had already tried to steal Ronald McSquirrel's red bag of  chips, known here as French Fries but when another tried to nick the money bag, it was too much. Sir Pennywise had to be moved to a place of safety.
There still remains the ultimate squirrel. You can see him next week.
Posted by Alenka at 8:20 PM