A Dawn Walk on the Beach

By morning, the fog had lifted.. I walked down to the beach to catch the dawn. It was practically deserted. Just an old man raking for prehistoric sharks' teeth and someone else fishing, while a bevy of pelicans rode the waves and occasionally took off, flew low over the water like the Dambusters and landed. They are a mud colour, not like the St James's Park ones at all but still gawkily appealing. They think they are beautiful and why not? On fishing piers you sometime see hordes of them, perched and waiting hopefully.  Scurrying at my feet were what I call the little clockwork birds, the sanderlings, looking for tit-bits, constantly dodging and racing the waves and seemingly never getting their feet wet.
We are in a place called Venice Island on the Gulf coast, a most un-Florida-like part of Florida with few vulgar gated communities and even fewer skyscrapers. After trying out many places we liked this one the best. 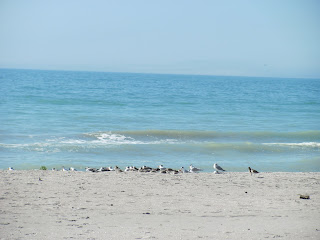 A photo I took a couple of years ago on Longboat Key, to the north of us but you get the idea. Those aren't sanderlings, which are much too quick to have their picture taken but gulls and terns.
Posted by Alenka at 8:33 PM