It's a record-breaking warm January for this part of Florida - not that I'm complaining, just remarking. True Floridians, who stay down here all year and brave the hot damp summers, are wearingly saying that they'd rather have a little respite during the winter. So far, they're not getting their wish. Even the nights are warm, with the sound of chirping crickets and floral scents in the air. The only things that make me think of winter are the occasional incongruous bare, leafless tree and the fact that the sun rises late and sets early. So the veteran residents who like to head for the beach, drink in hand, to meet their friends for a sunset happy hour are there well before six o'clock. And I don't have to get up too early to catch the dawn. 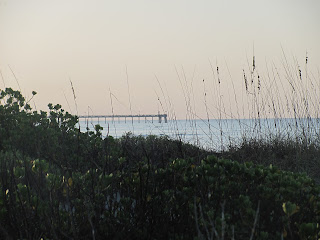 I haven't yet mastered the art of raking for prehistoric sharks' teeth, small, black objects which look like dodgy fillings. The old "geezers", as hubby calls them are out with their rakes at first light, patiently sifting through the sea-washed sand. Apparently they can do quite well selling the teeth to local souvenir shops, which need an unending supply.  I don't know why so many prehistoric sharks fetched up on the sandbanks of Venice but it's known as the "Sharks Tooth Capital of the World". 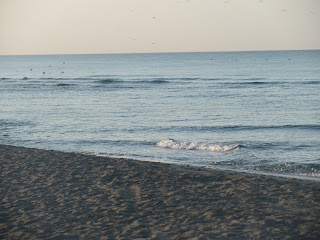 No great surf here, just the gentle splash of the waves. Hurricane season has long gone by. 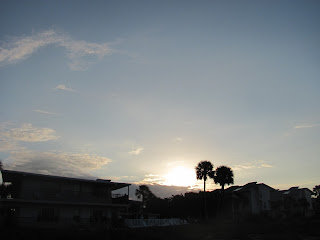