High drama here this morning!  I puffed out for my dawn jog on the beach. The wind had been howling all night and there was a nip in the air for the first time since we'd come.  I pulled my hood over my head and tried to keep moving.  The beach is a sad sight at the moment. The infamous "red tide" of poisonous algae,  which sometimes lurks off the Florida shores, had hit a number of fish, whose sad remains have been littering the coastline for the past couple of days. Locals were hoping the winds would push it away. But this morning, something rather bigger had washed up. 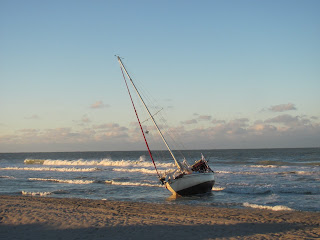 There was no one around. I didn't have my phone with me so jogged back to the house as fast as I could in my unfit state to get hubby and the car, hubby being a sailor who might be able to help. By the time we got back, a small crowd of interested locals had gathered with dogs and cameras and early morning cups of coffee. 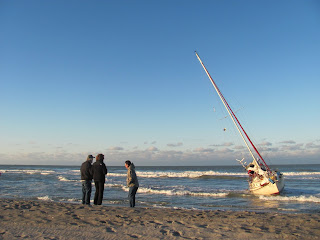 But we were too late to effect a heroic rescue. Apparently the boat had  not slipped its moorings, as I first thought (no moorings nearby, hubby patiently explained) but had sailed too close to shore last night and beached. The occupants had already been rescued by a jet-skier, someone told us. Actually, they could probably have easily jumped out for themselves.  "I thought it was a UFO!" said one of our neighbours, wandering up, shoes in hand, "the way I saw the lights moving on the beach last night." 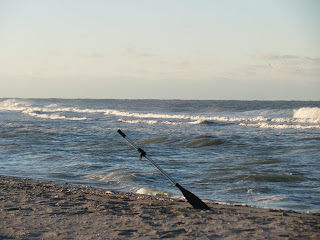 An elderly shark tooth collector had found something. "Thought I'd at least get their oar back for them!"
"Maybe we can claim salvage rights", someone else said, hopefully. 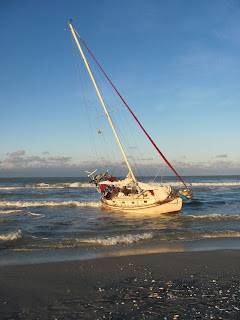 Meanwhile the humiliated vessel, piled high with high tech equipment which evidently hadn't done its job, what remained of her dinghy dangling uselessly from the stern, was left high and not quite dry, waiting for her owners to come and take her home..