We drove a fearsome mountain road, hairpin bends, rocks on one side, sheer drop on the other. 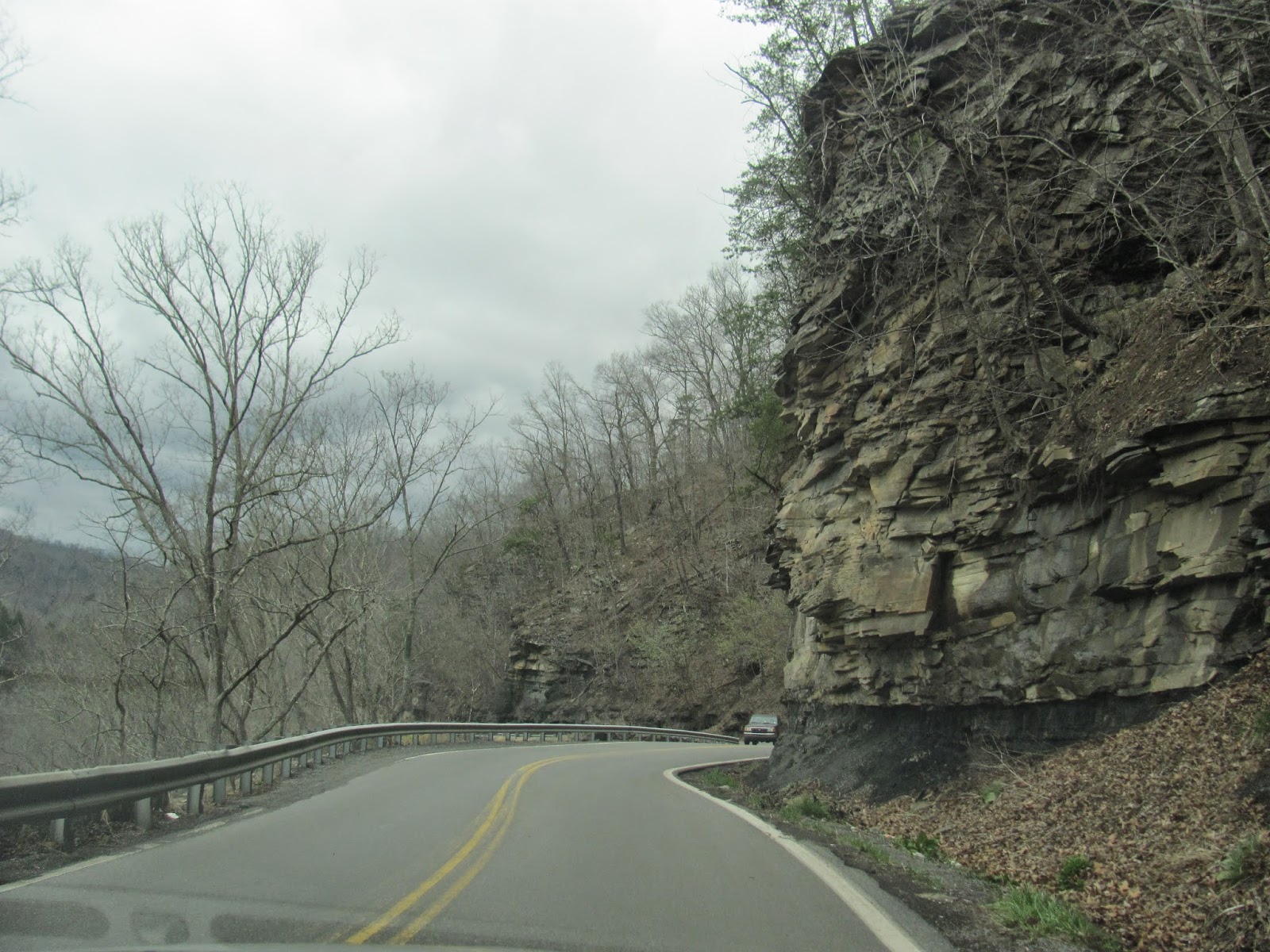 And some potentially interesting situations. 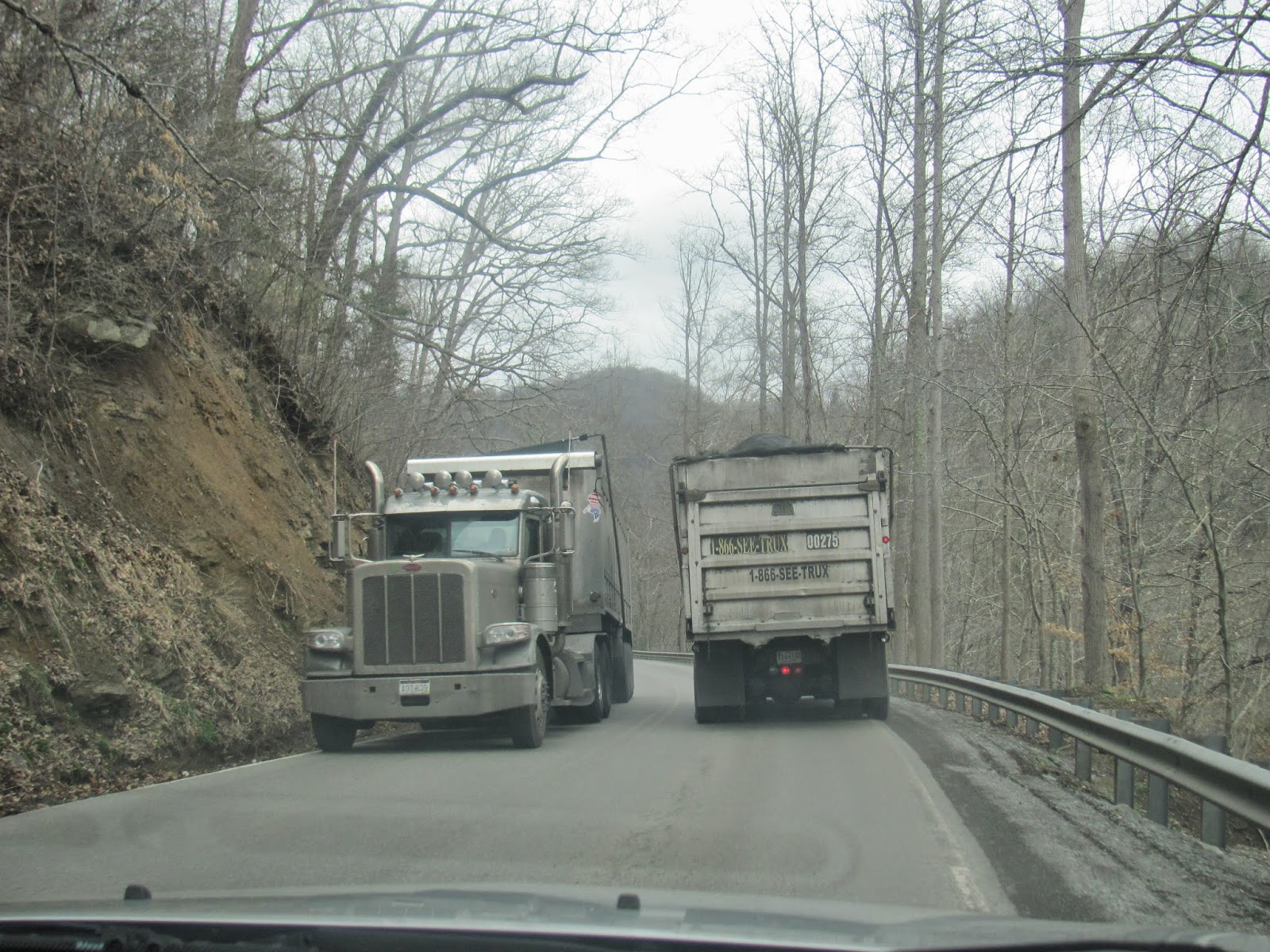 I wouldn't get too close behind this one... 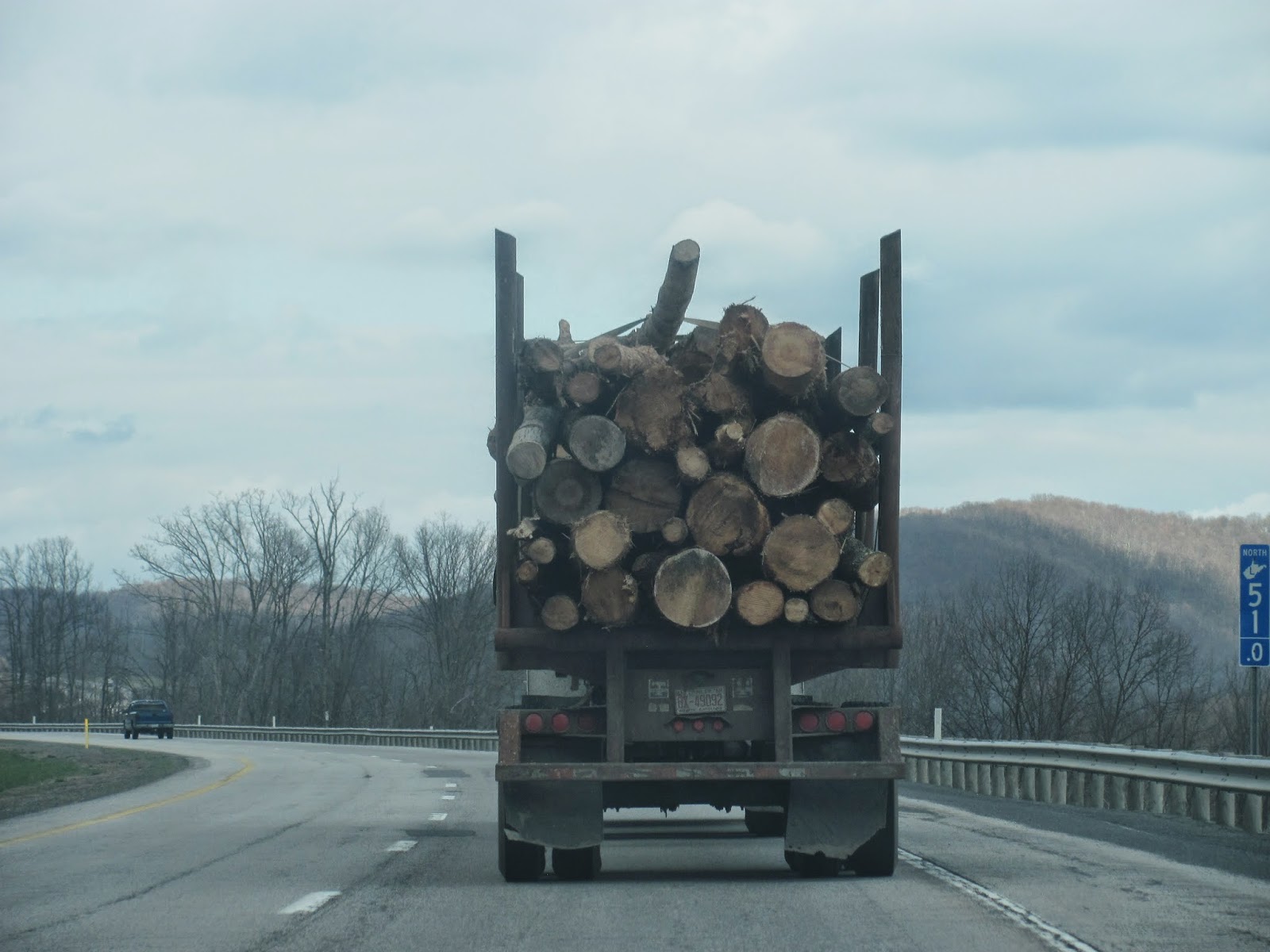 Old mine works by a babbling brook. Locals call the valley, the "Winding Gulf". It's now the "Coal Heritage Trail". 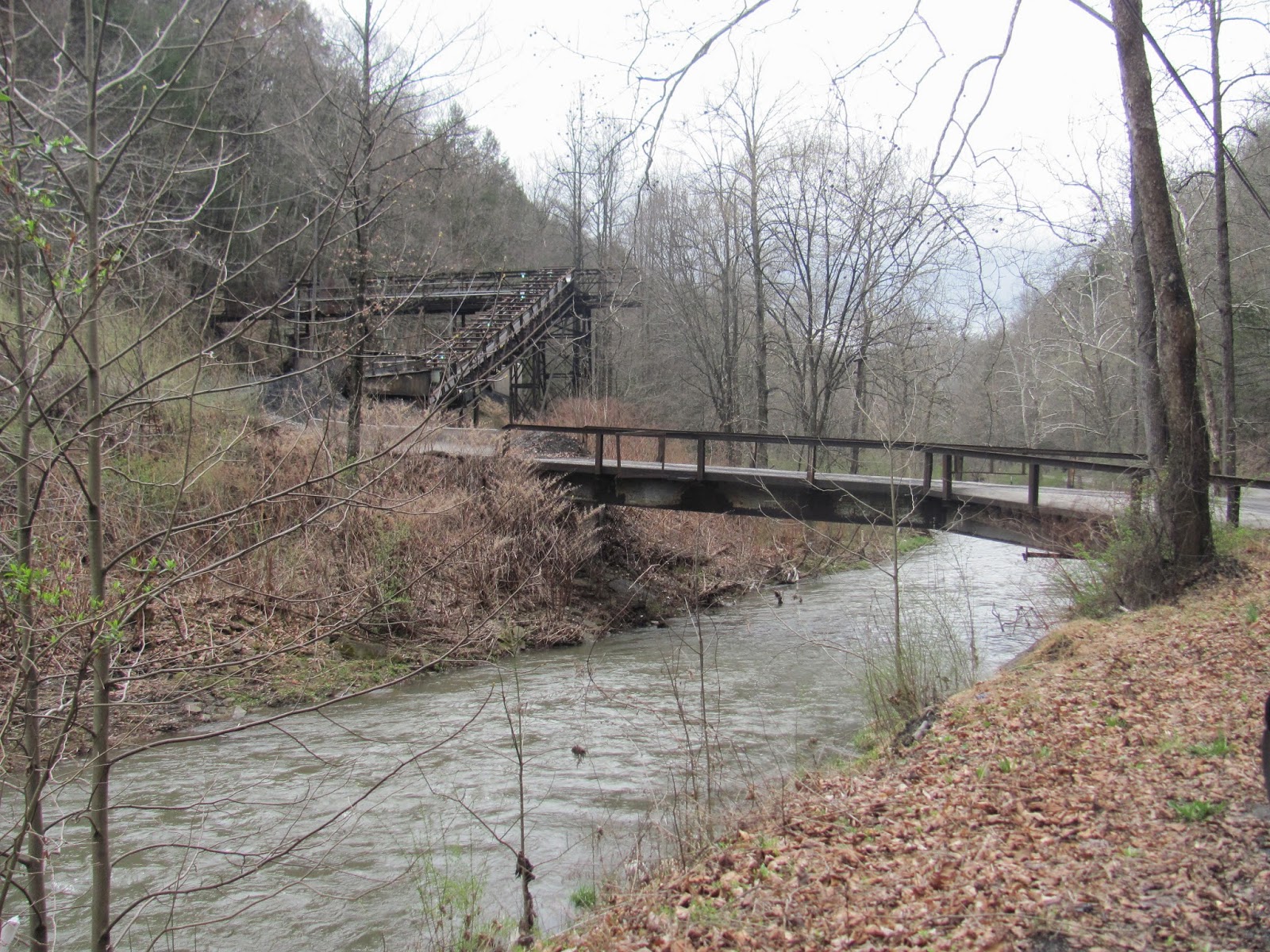 There's still plenty of mining here, though not as much as there used to be. 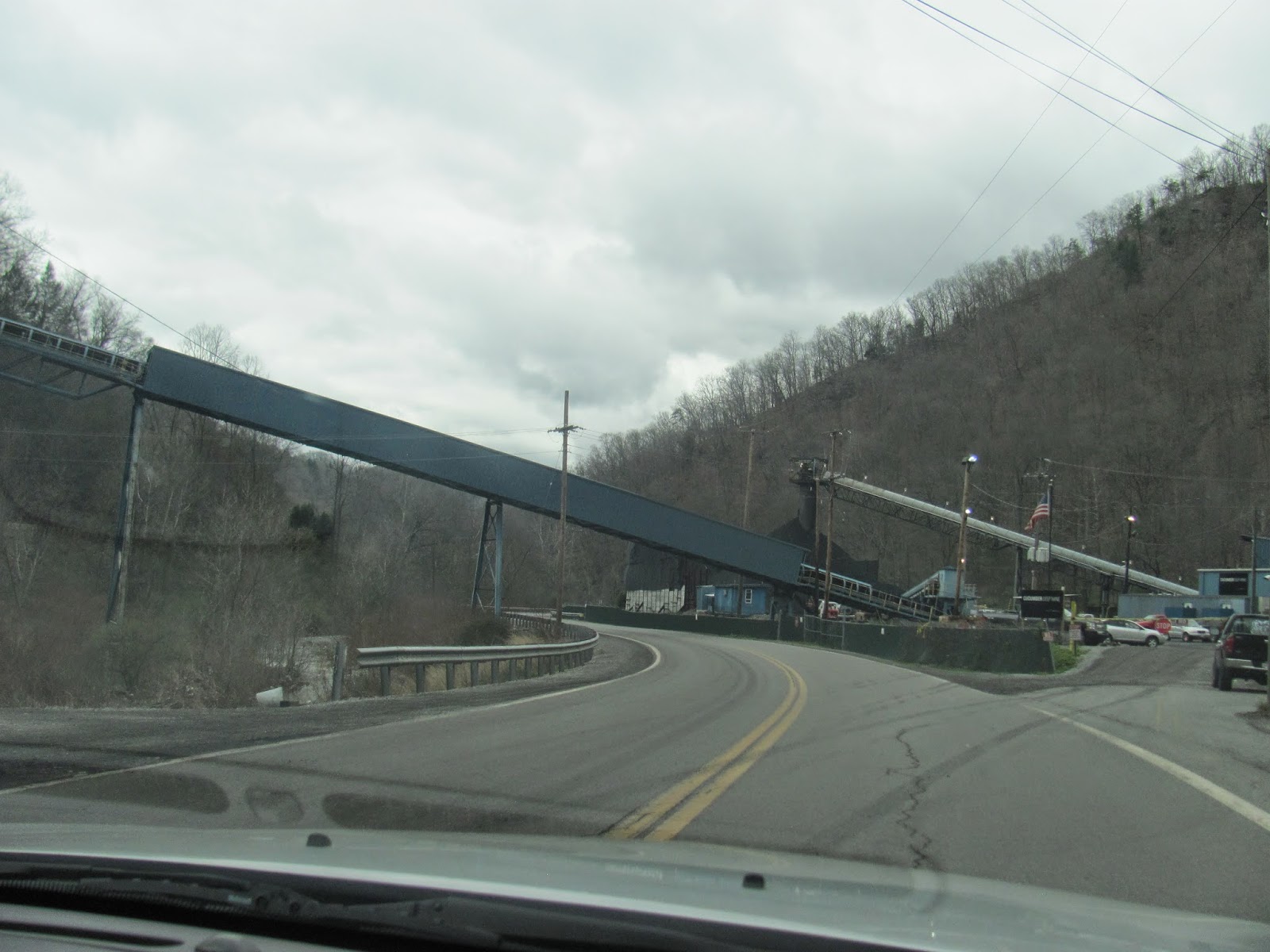 and little mining villages with houses strung out in rows, nestling against the hill. Signs read "Coal Keeps the Lights On."  If there was no more mining in West Virginia, one lady we met said, "New York City would go dark." Whatever the rights and wrongs,  without mining, what would happen to these people? 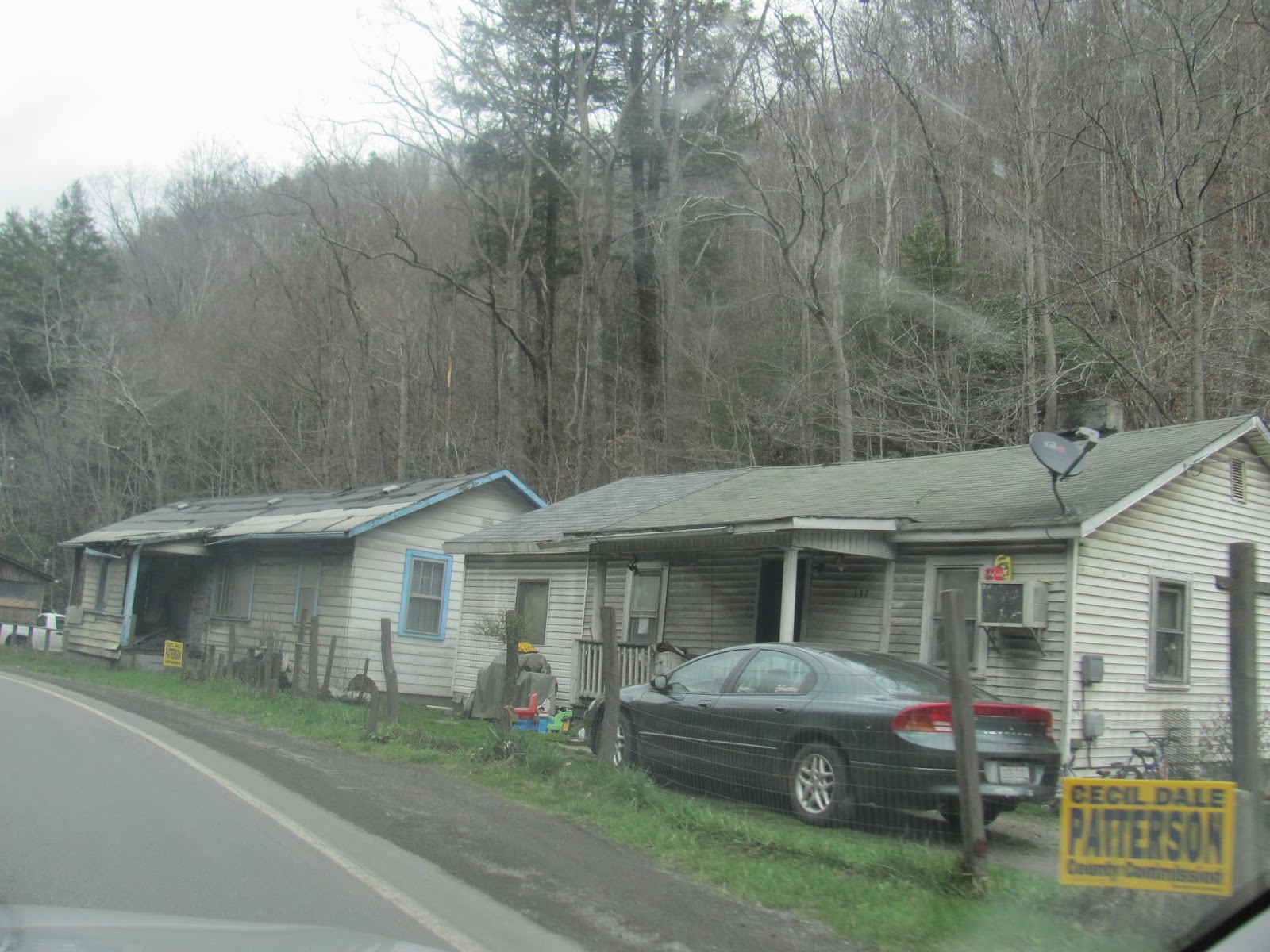 Well people do say it's a bit like the Hunger Games around here. 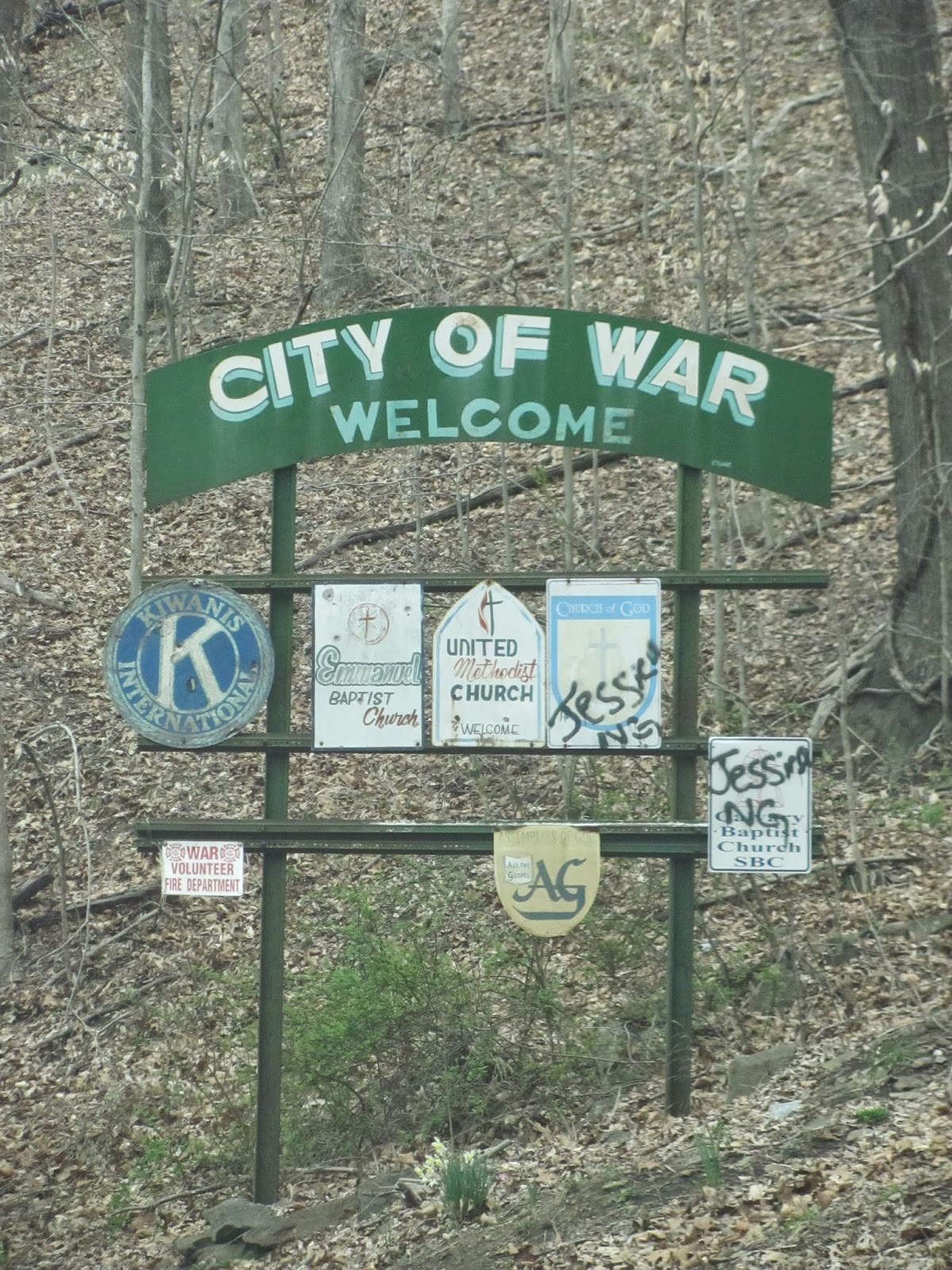 An appropriate scene for Good Friday. 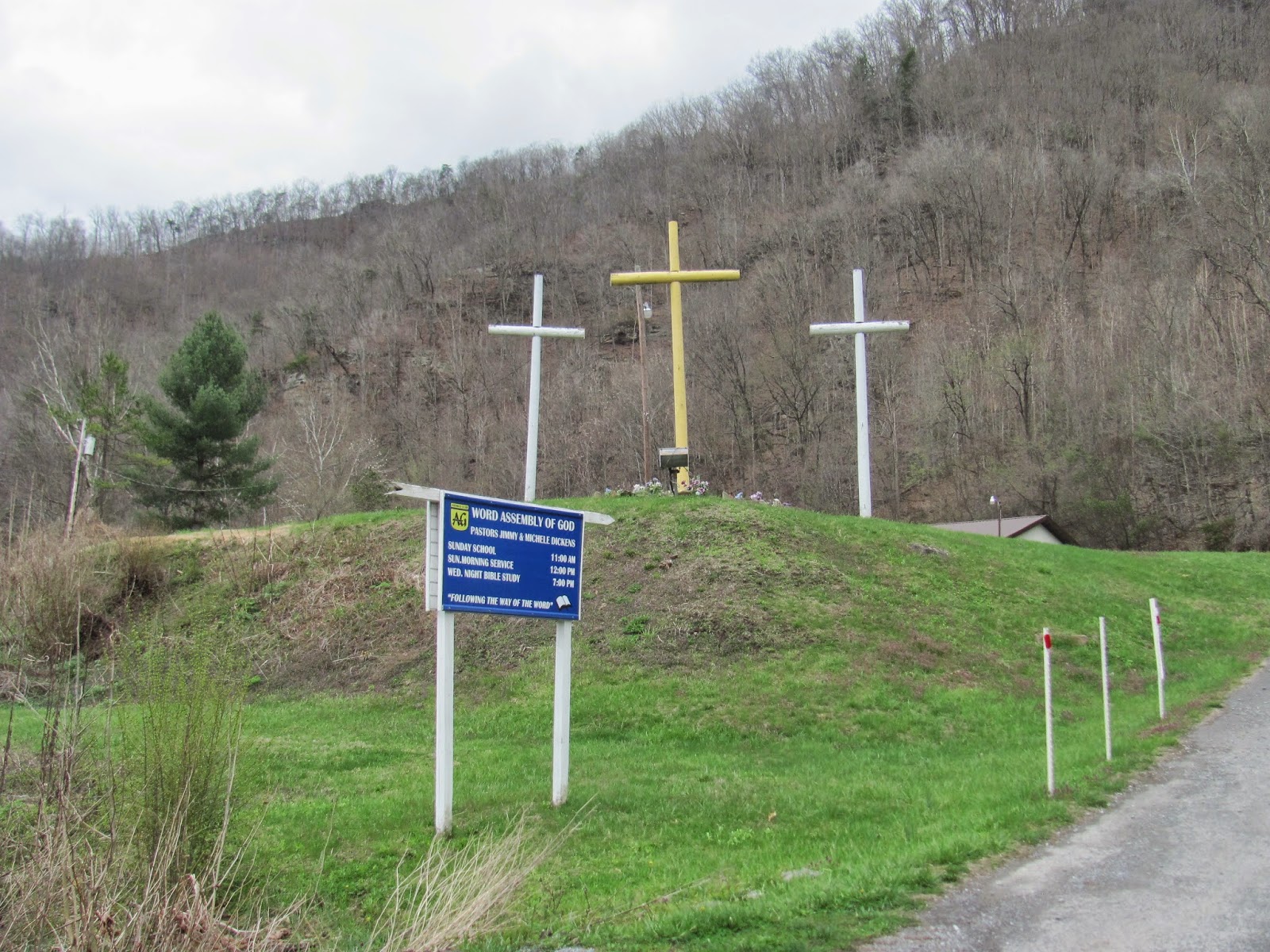 Another appropriate scene for Good Friday. 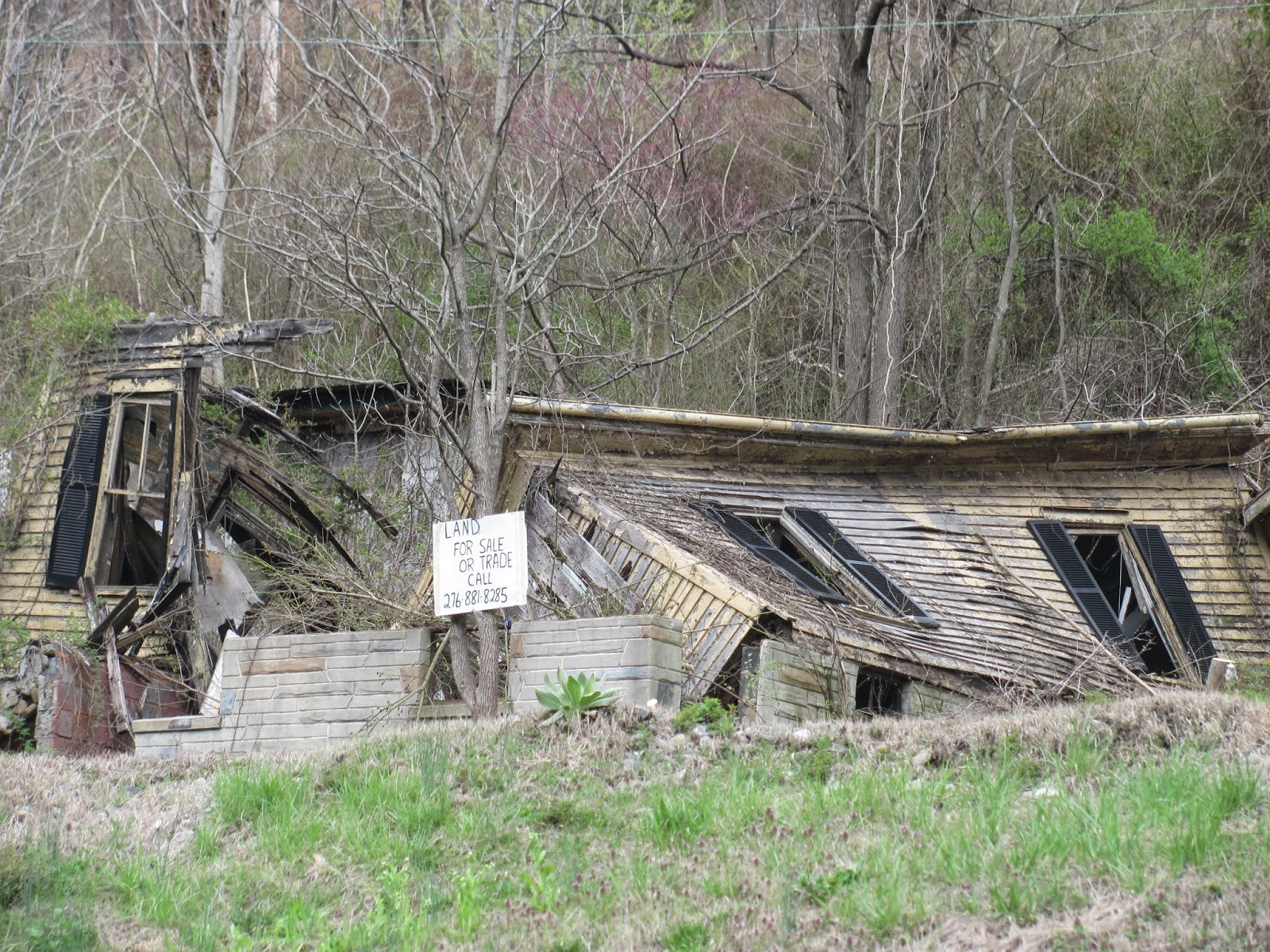 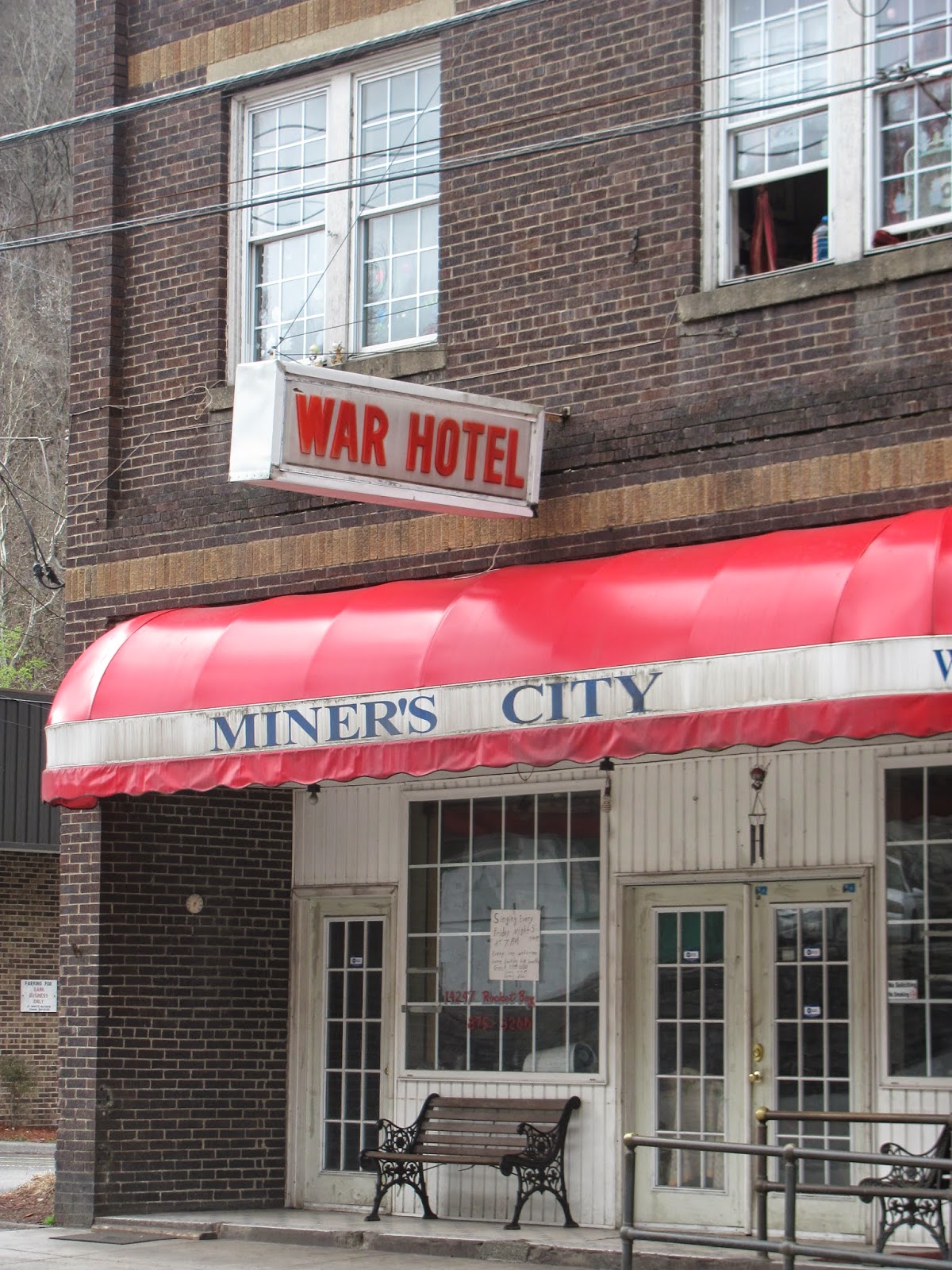 "Mama Jess" seems to be popular around here. That must explain the graffiti on the town sign. 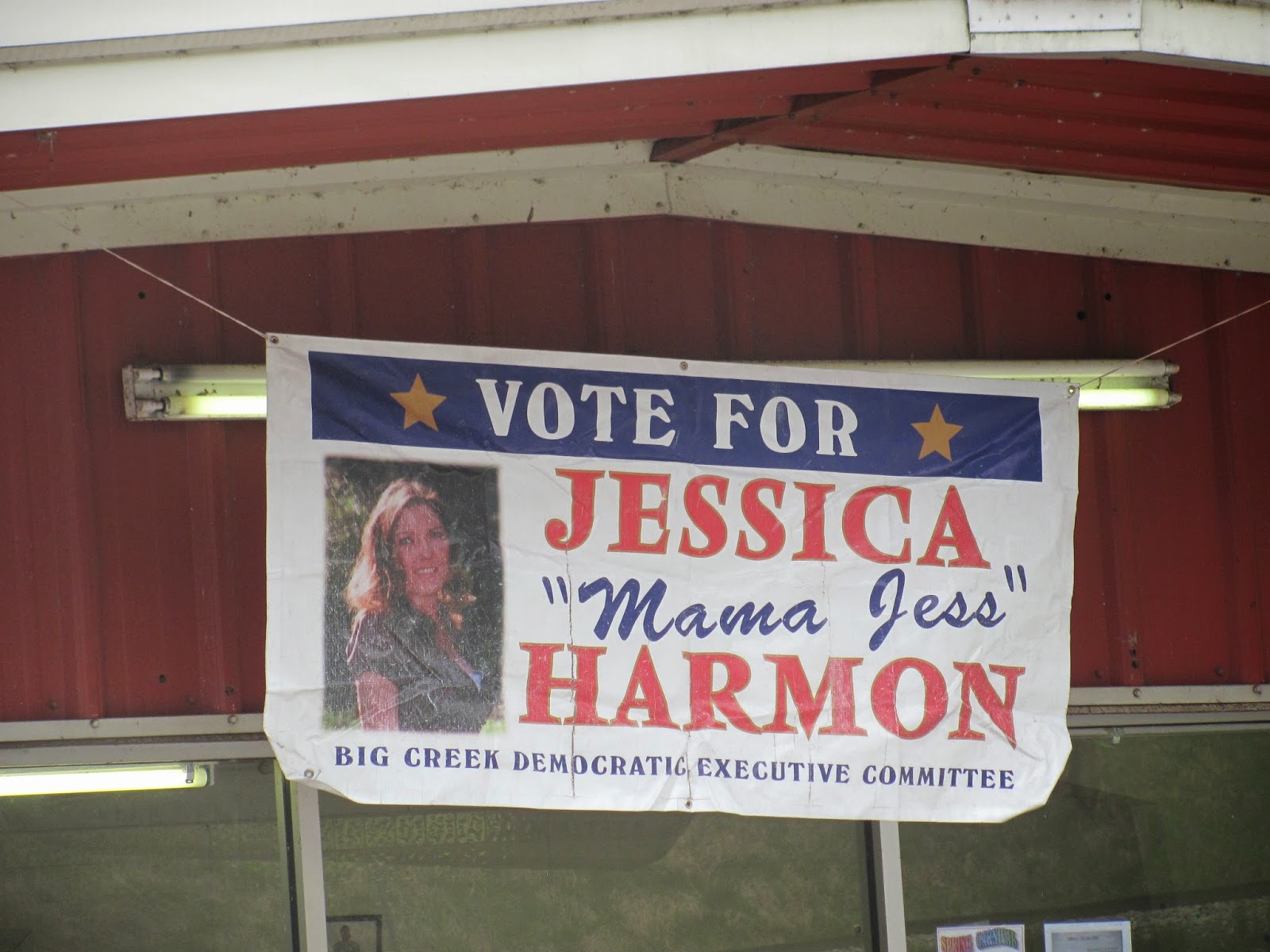 A little wooden church. An earlier one we'd passed had a sign in pink letters, "A Nice Place to Go to Church" 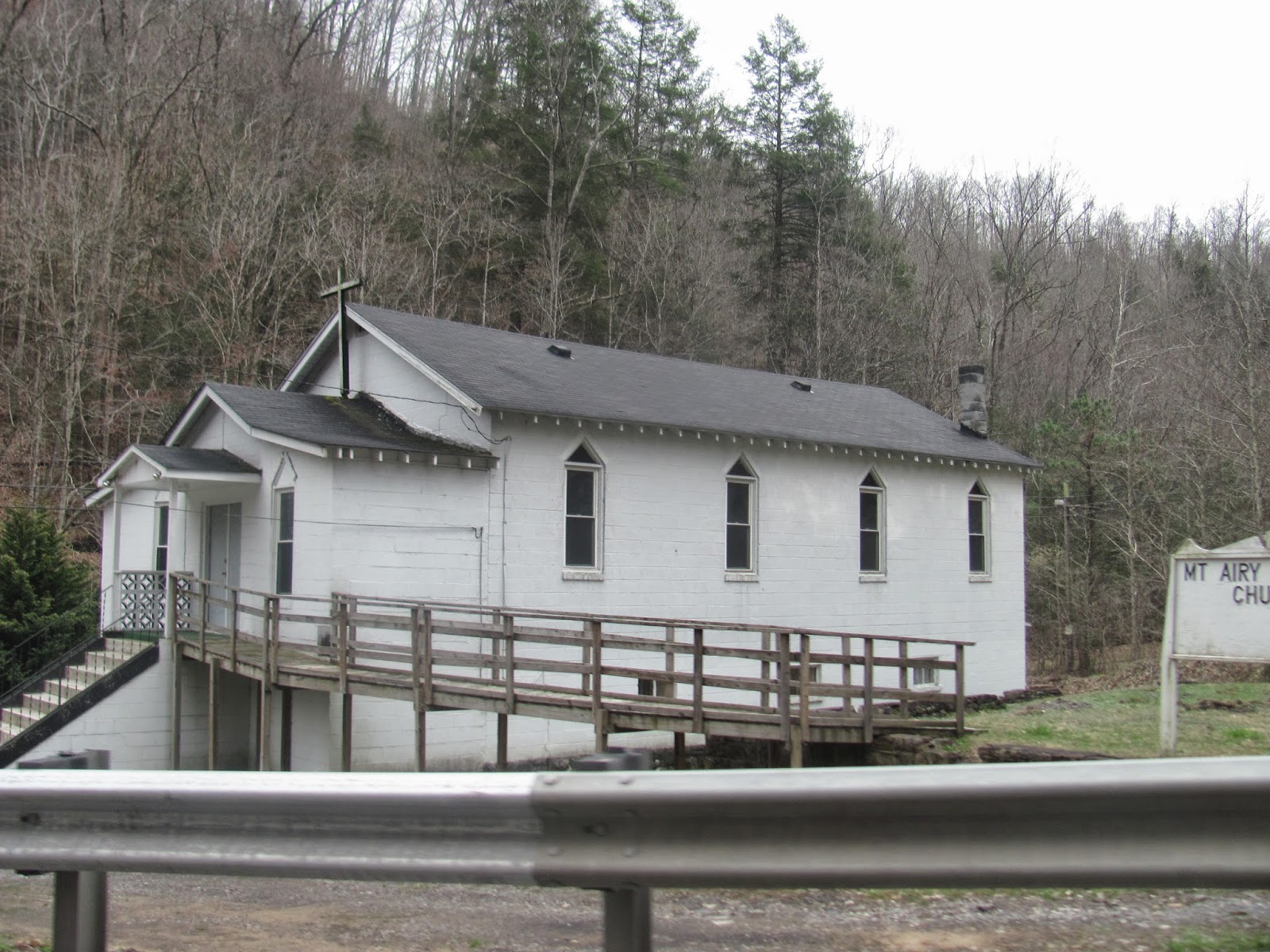 Local heroes -  the "Rocket Boys", led by Homer Hickam, were schoolboys who designed their own rockets and went on to win prizes for them at the 1960 National Science Fair. Homer eventually achieved his ambition and went to work on real rockets at NASA. 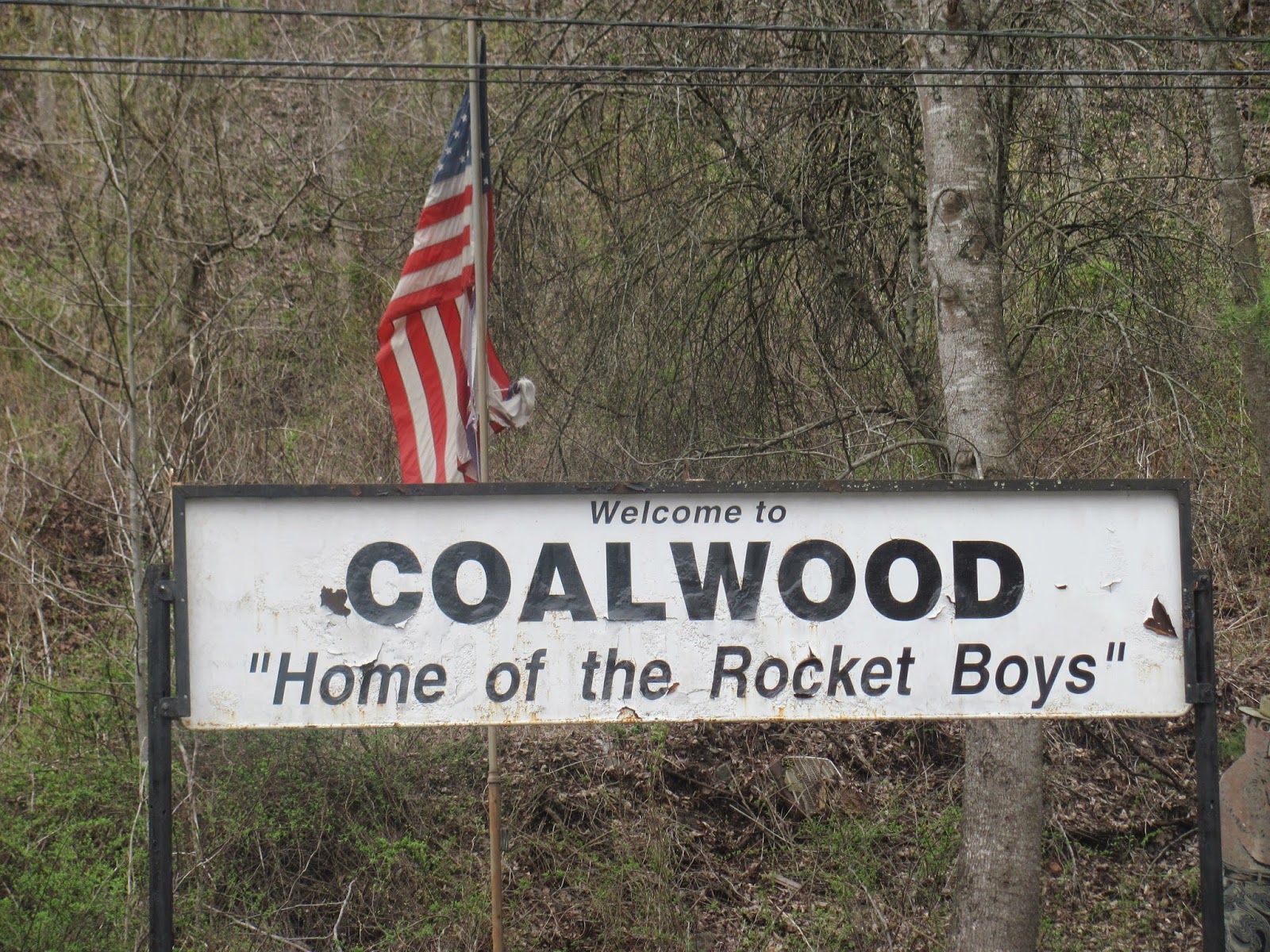 Another interesting bit of history, near the town of Welch. This railway car was sent by grateful French citizens after the Second World War. Local West Virginians had helped in humanitarian relief.  Those were the days when the Winding Gulf was known as the "Smokeless Capital of the World." The car was apparently filled with French perfume and other luxuries and ended up abandoned in a field. It doesn't say what happened to the perfume. 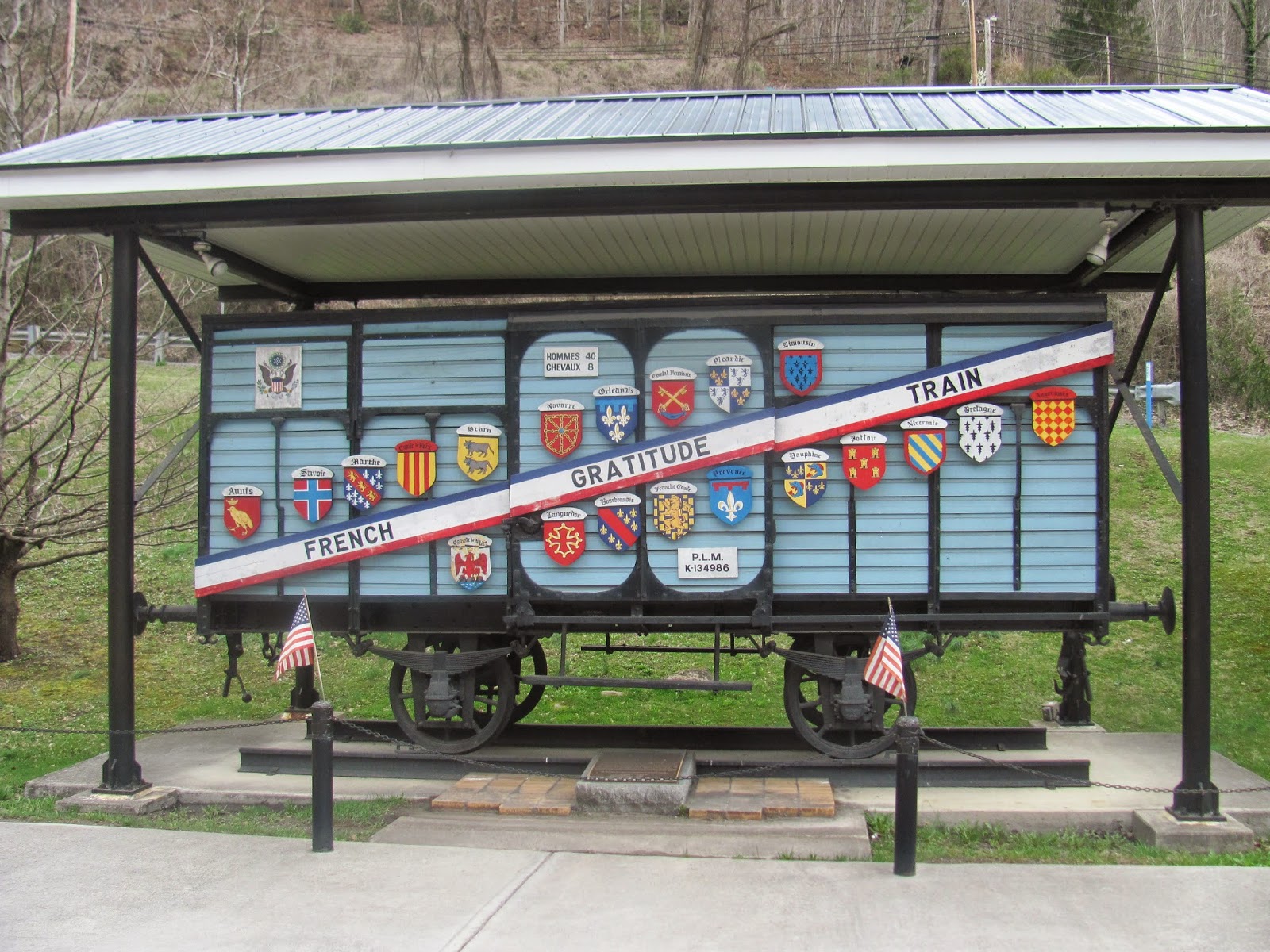 They could probably have done with some. 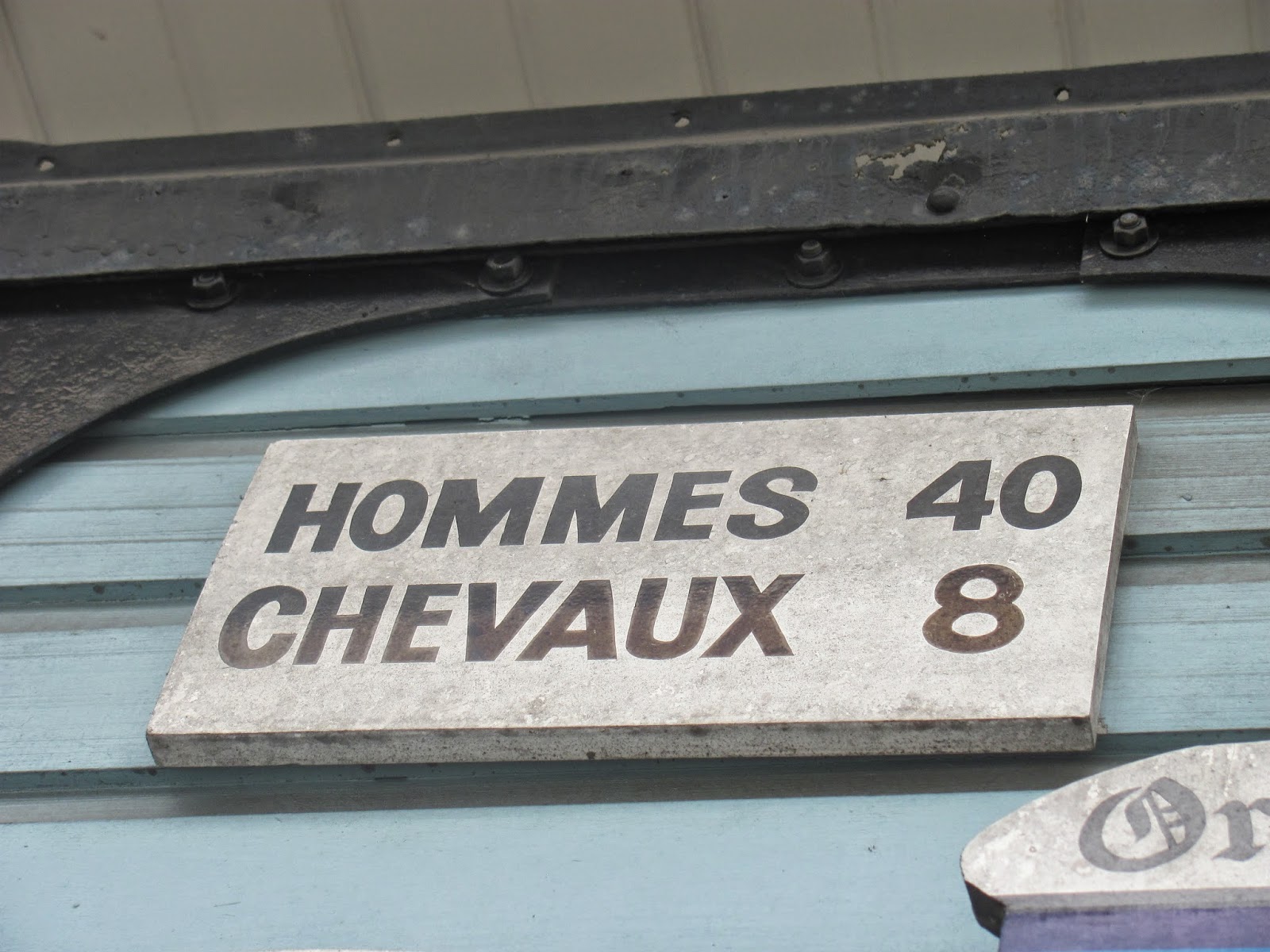 A stately-looking building we thought at first was a church turned out to have a basketball court behind with razor wire around it. Something, I believe, to do with Law Enforcement. 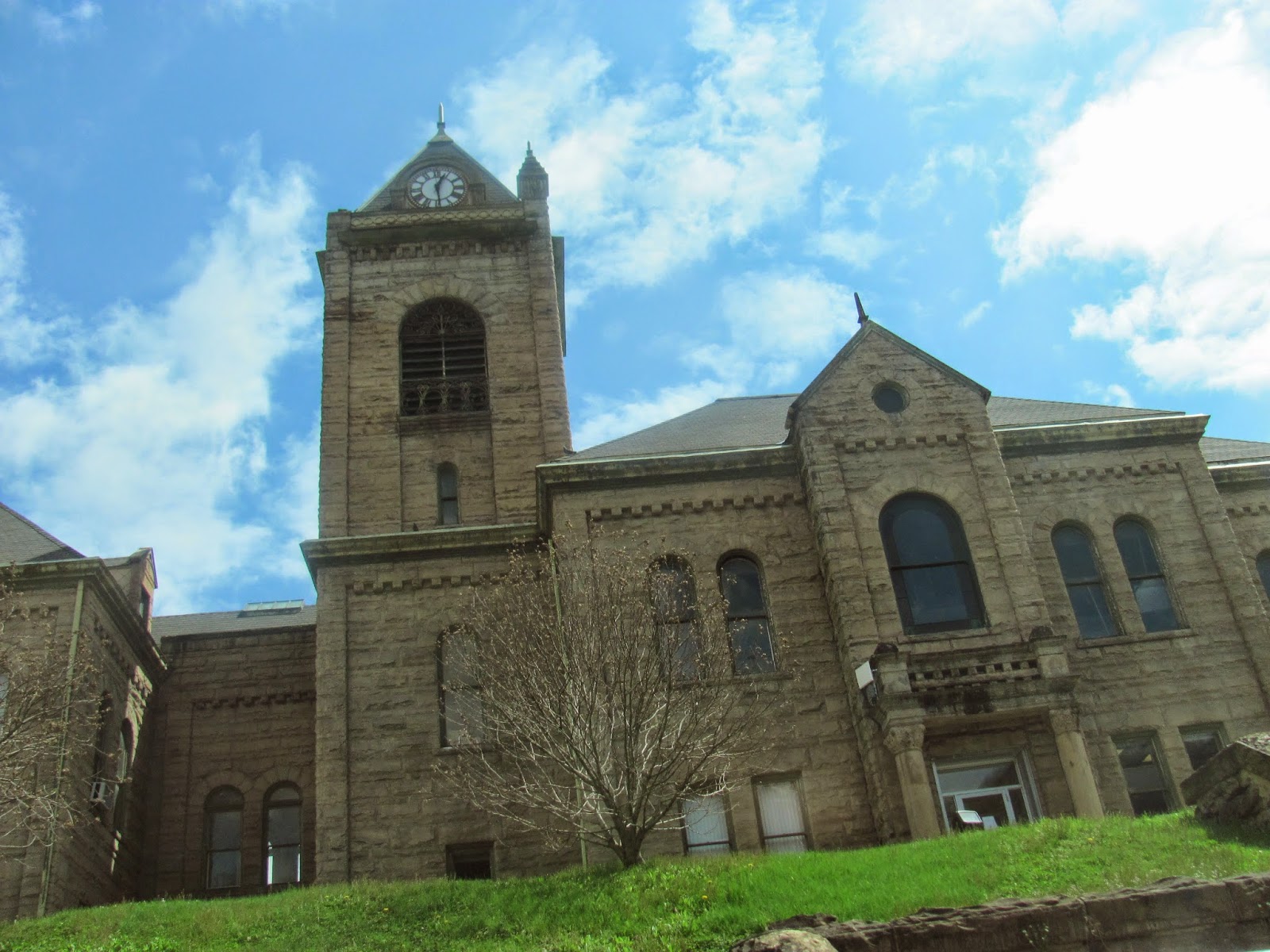 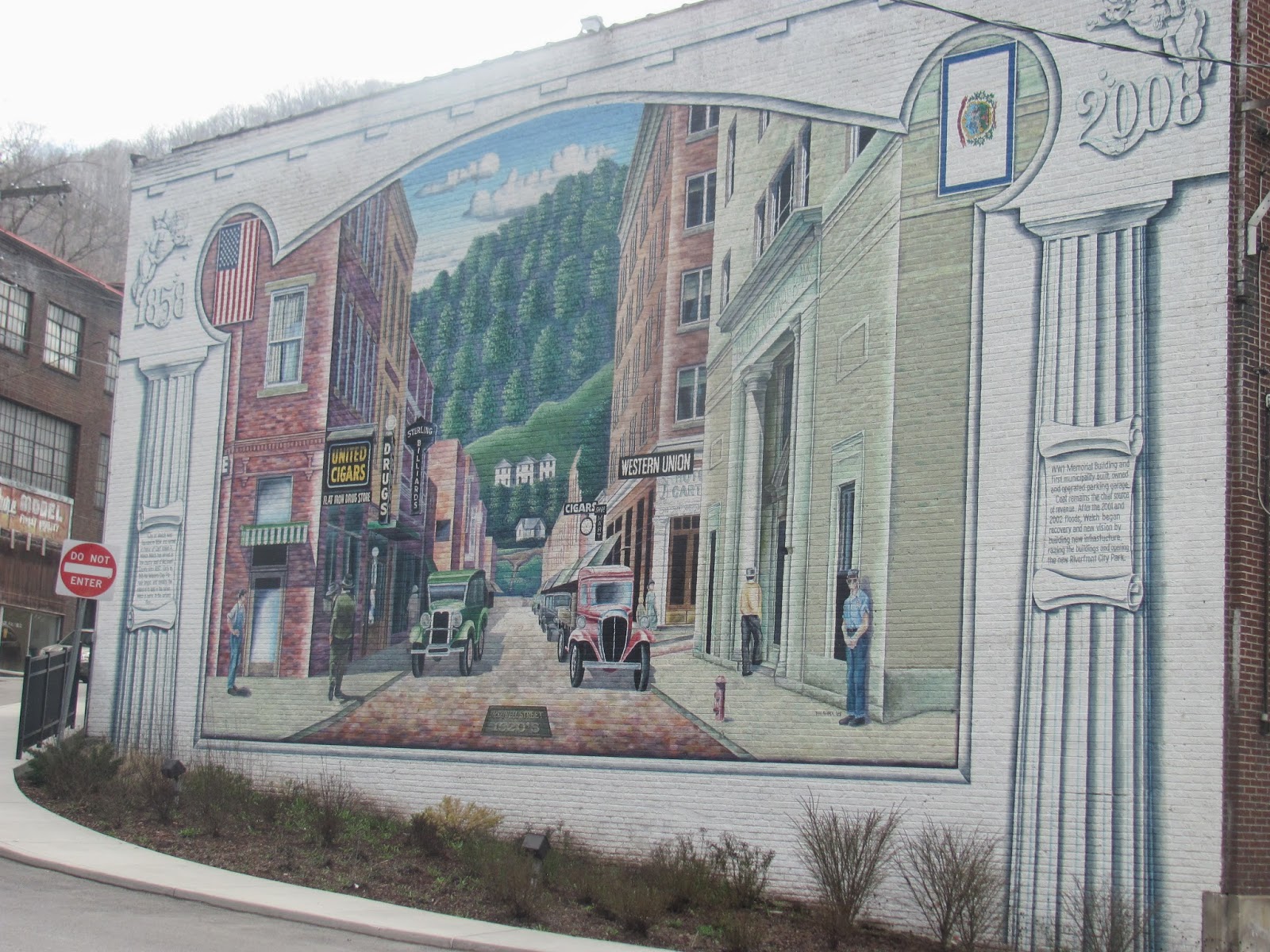 Sadly, nowadays,  there's all too much of this sort of thing. 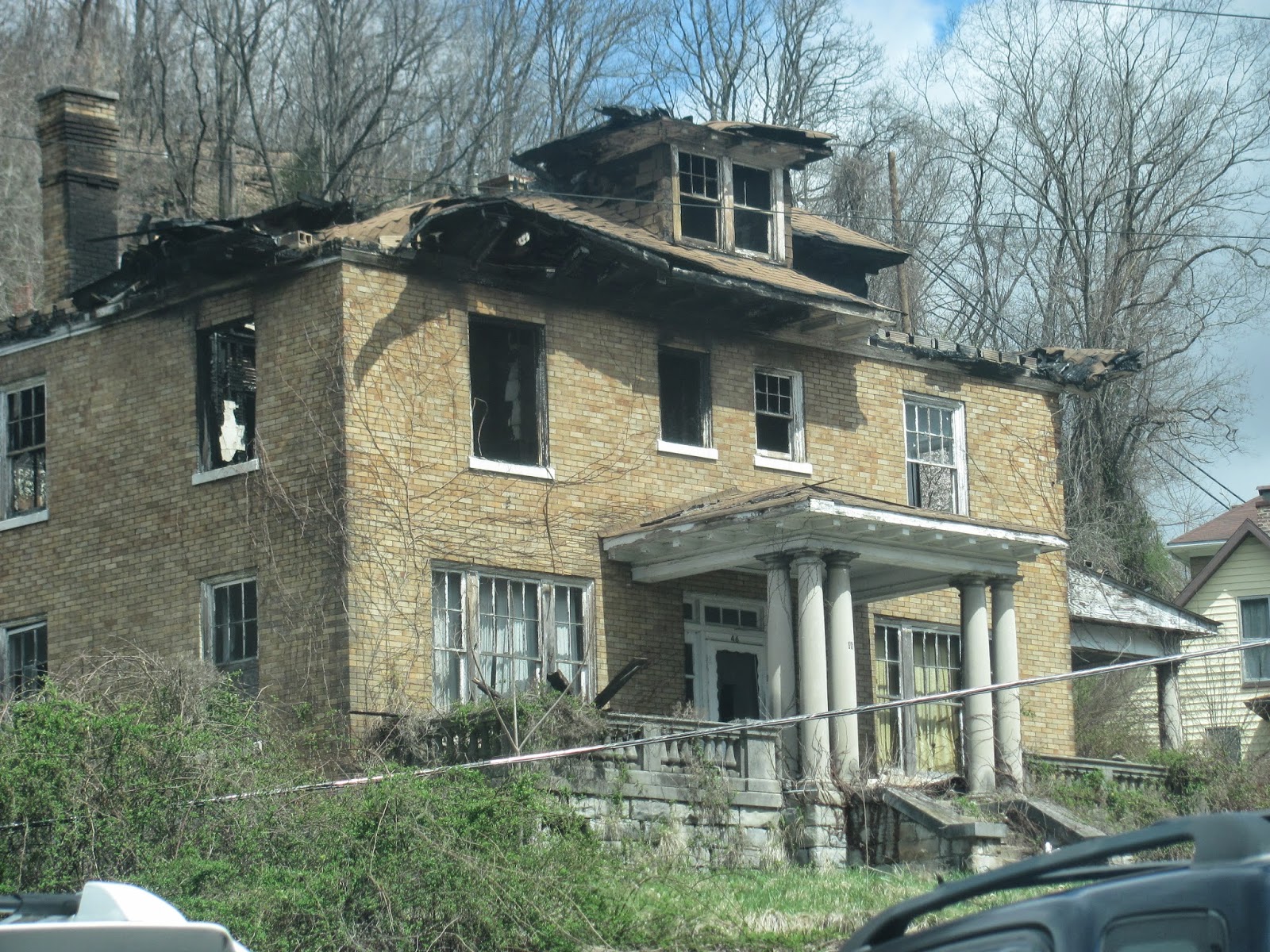 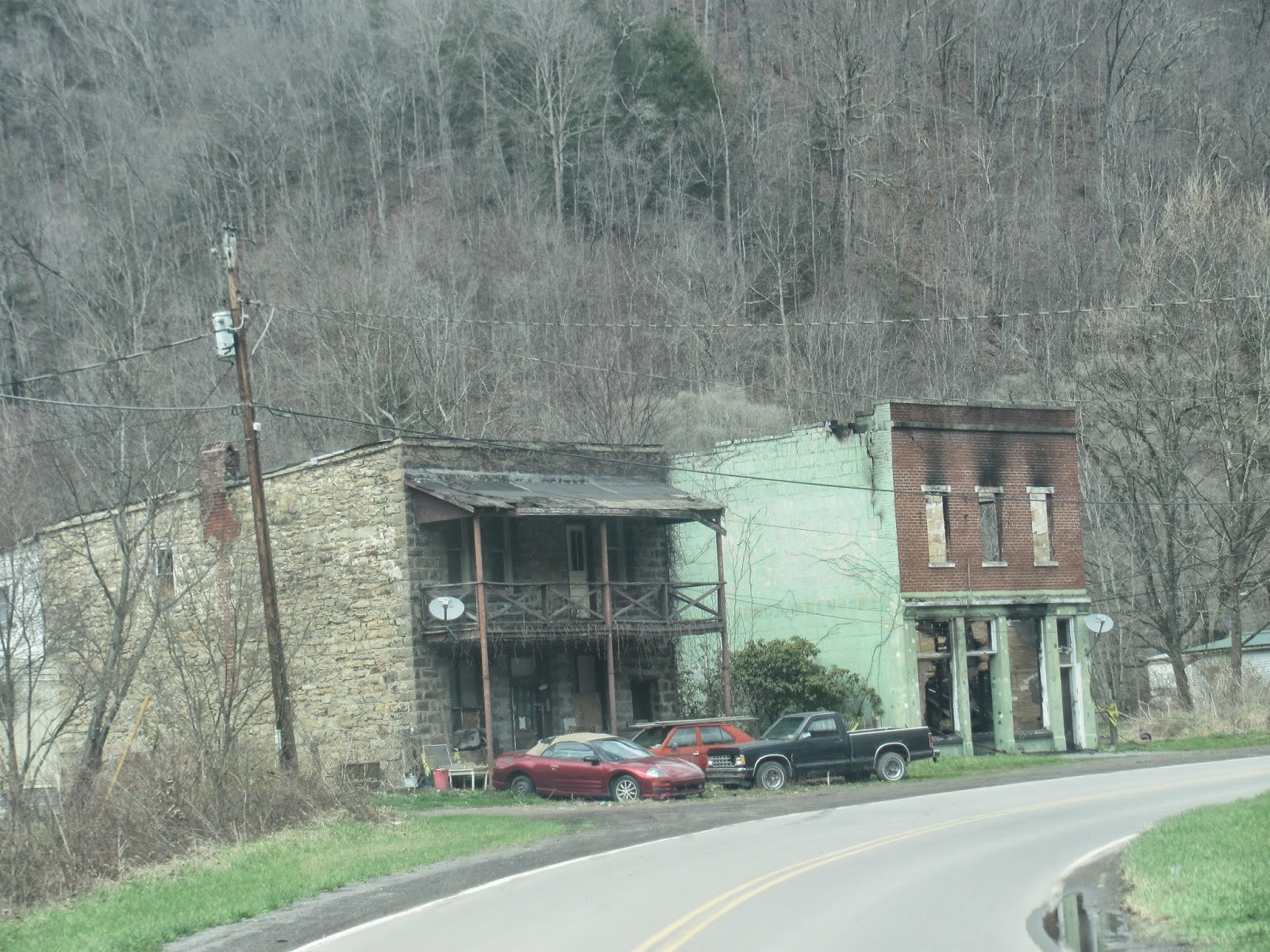 Though the odd yellow forsythia 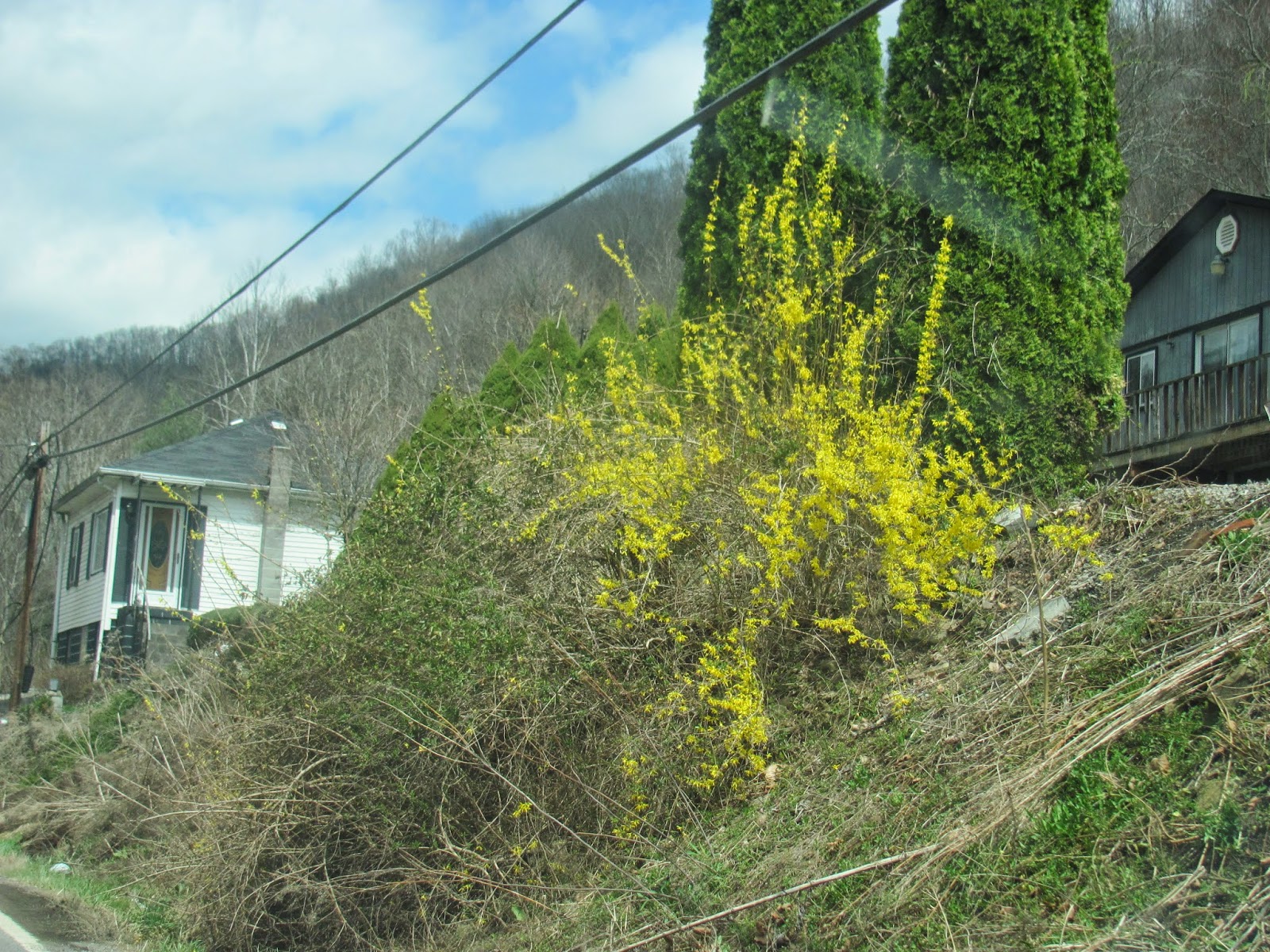 or flowering tree popped up with a little reminder of spring 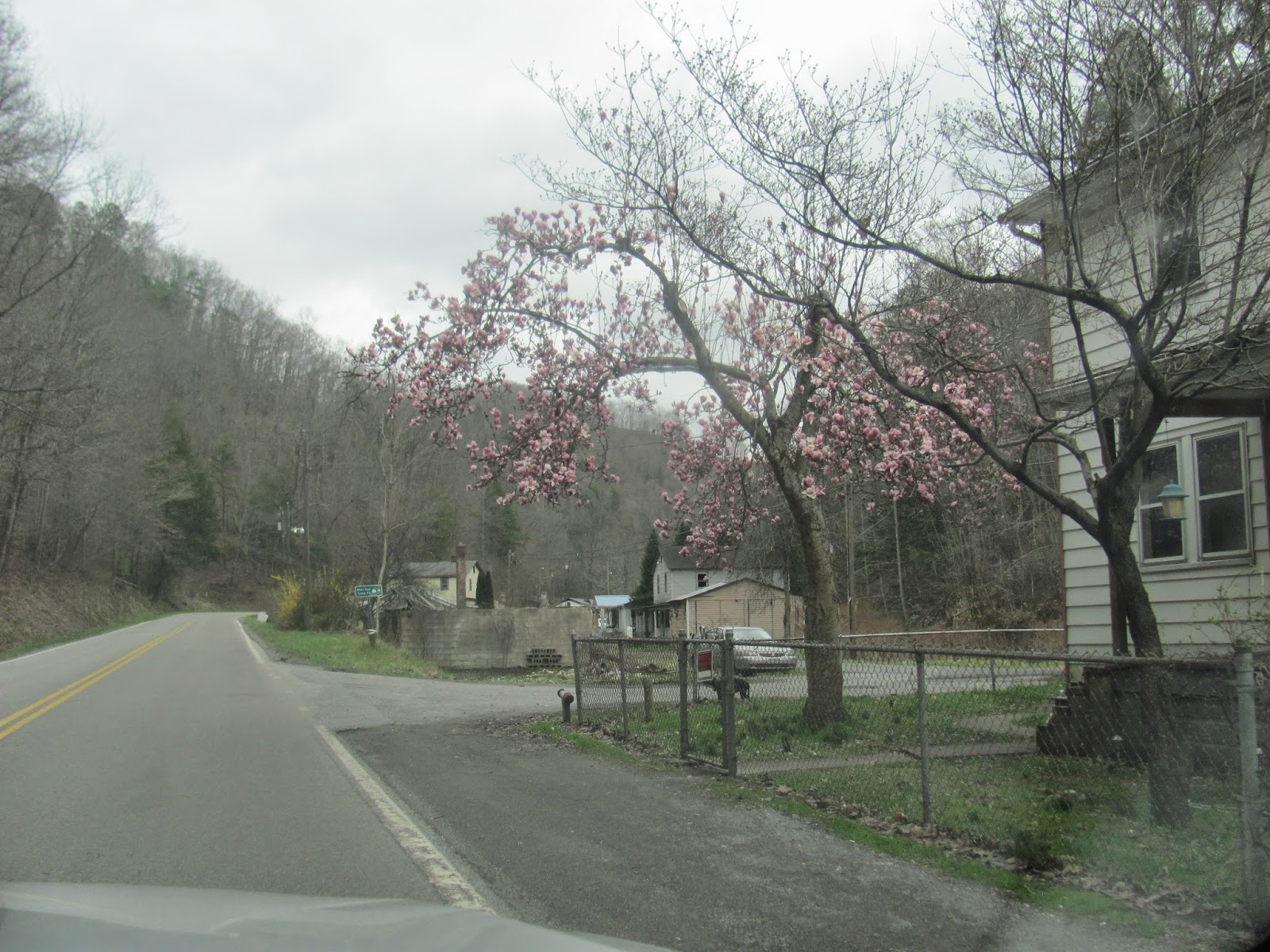 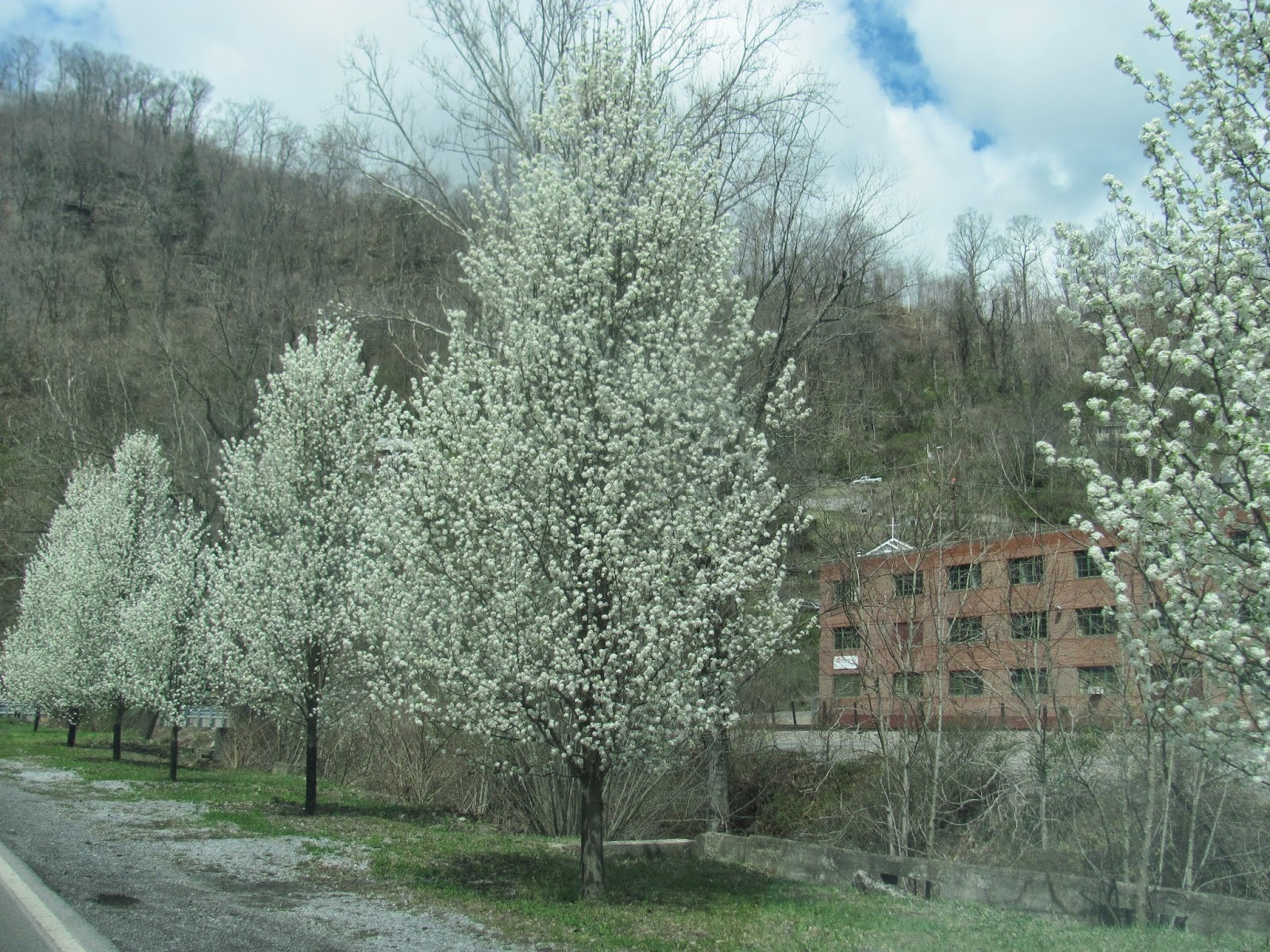 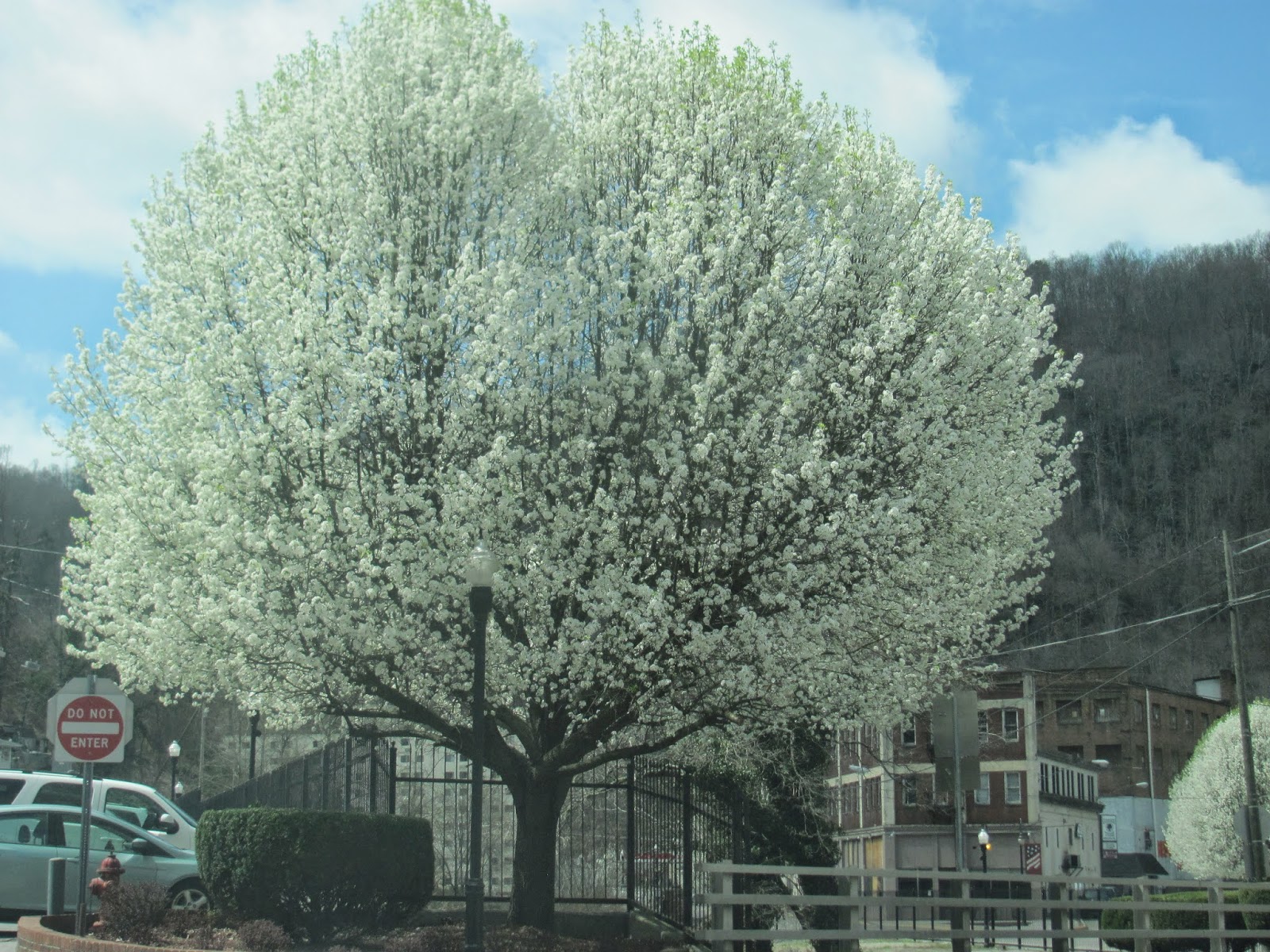 Though I didn't manage to get a pic of the giant, inflatable Easter Bunny. There's always something to cheer you up.
Posted by Alenka at 10:21 AM