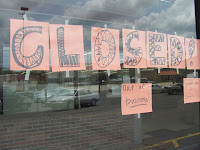 Some British readers might sympathise with this. Our village shop has closed. Not that it was any great shakes. It always had a musty smell that lingered on the plastic bags in the car and in the house after you got  the stuff home. I rarely bought anything there, apart from milk and the local paper which you could usually guarantee would be fresh. Though one time I needed some of those small frozen onions to make one of my few American signature dishes, creamed onions, for Thanksgiving (I like them because they were the favourite dish of Errol Flynn as General Custer in They Died With Their Boots On).  I noticed the sell-by date was some time last year, so I pointed it out to the checkout girl. "Oh Darn", she said, or something stronger, "That's always happening. I cleared out some shelves and found some yoghurt which had, like, mould growing on it (except she said mold) yeeeaaaw."  But it was somewhere you could park right outside - it was actually called "Park and Shop" - and rush in to get your milk without the palaver of a long queue. There was very rarely a queue of any sort. And at one time they sold maple syrup made by some people up our lane, so it actually had our lane's name on it, which was great for presents.But now it's gone and there's going to be a Dollar General instead, which will lower the neighbourhood's tone a few notches. (Think Woollies in the last sad years before it went bust and the sort of places you used to find it.) And we'll have to resort to getting milk from the garage.
Posted by Alenka at 10:20 AM