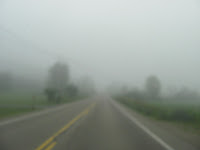 Yes, they're back again and Cattaraugus County drivers are still indulging in their favourite foggy pastime of driving without their lights on. I have been pondering on a suitable way to alert them, by which I really mean a suitable way to vent my wrath when I see the usual grey pickup truck blithely emerging out of nowhere, probably thinking to himself, "No problem, I can see fine."
NO Dude, (as hubby would say) the problem is, I can't see YOU. How much does it take to drive that into your thick head?
If I was in Britain, I would flash my own lights a few times, which would probably mean that he would eventually get the message. (Though of course, if he was in Britain, he would probably have his lights on in the first place.)  But in America, flashing your lights at someone means something altogether different. It means that you have passed a police car lying in wait and are helpfully warning the other chap about it. There's been talk of making flashing your lights illegal. So that's no good. If only there WAS a police car. That would serve 'em right. But of course, police cars the world over never show up when you need them.
This morning, I actually caught a lightless driver as I was jogging up our lane. I tried sign language - making circles round my eyes with my fingers. He probably just thought I'd lost my glasses.
Posted by Alenka at 7:37 PM