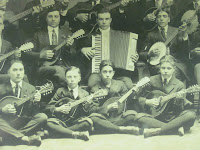 The small, scuffed sandals,  worn by a long-ago little girl, balance on top of an old travelling trunk. Next to them, a crochet hat and a lacy white dress.  Nearby,  a  glass case displays a Bishop’s red socks and his gold-embroidered gloves. 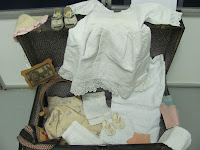 The new museum at the Italian church in Buffalo is exactly the sort of museum I love;  no high-tech stuff,  just a glorious cornucopia of objects, a goldmine of memories.  And it tells a tale of hardship and homesickness, tears and laughter,  that  speaks to anyone who’s left their home for somewhere else, including me. 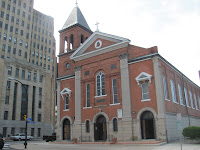 The inner-city church, St. Anthony of Padua has been a focus for the Italian community in our nearest metropolis   since 1891. Then, Buffalo,  on the eastern shore of Lake Erie,  was one  of America’s richest cities,  a rising commercial and industrial force and immigrants, including thousands from impoverished southern Italy, poured in, many lured by dodgy recruiting agents. 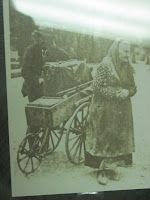 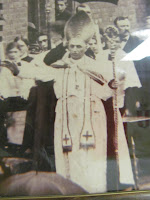 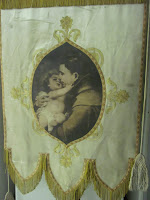 These days,some 80 people still attend the Sunday Italian Mass,  more on special feast days.  But most descendants of the Italian settlers have left the neighbourhood for more affluent areas  No longer mostly dockers,  labourers, organ-grinders,  the butt of cruel jokes,  but policemen,  business leaders,  doctors, lawyers and politicians -  assimilated Americans.  Italians have contributed rather more to America than macaroni and the Mafia. 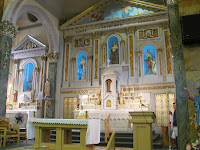 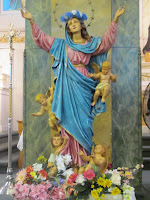 But rooting around in cellars and attics, he found a lot more.  “Why hide these wonderful things that people would enjoy seeing?”  If nothing else, the courageous efforts of the  migrants,  travelling to the New World, was worth commemorating.
Monsignor Voorhes found room for the museum in the church basement. An appeal to Italian-Americans in, as he put it, the “fashionable suburbs” raised 8,000 dollars.  More interesting were the objects donated.   A woman had just called to offer her grandfather’s  “railroad watch” (he’d worked on the railways) and her grandmother’s christening robe, from her baptism in St Anthony’s in 1902.
The diocesan archives turned up probably the most valuable exhibits,  a rich set of fiddleback vestments, the kind used in the days when the Latin Mass was still the norm.
There are reliquaries and tabernacles,  zampogna - Italian bagpipes - and a mandolin,  elaborate silk banners, painstakingly worked and inscribed with the name of a women’s group,  “Societa Femminile S.Raffaele Arcangelo”, a faded Boy Scout flag. 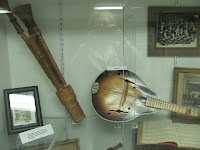 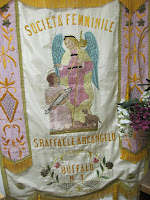 Msgr Voorhes’ predecessor,  Father Secondo Casarotto, himself born in an Italian village, was an avid historian and had already collected piles of photographs.  Now they’re on the museum walls:  tenement-dwellers, vegetable vendors, children playing in a gutter near a dead horse. Some small boys visiting the museum couldn’t get enough of that one.
There are processions winding through streets of houses now mowed-down in the name of urban renewal,  faded sepia basketball teams,  brass bands,  legions of altar boys and  First Communicants,  graduating classes from the now defunct church school. 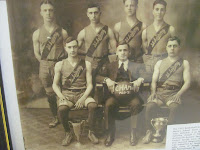 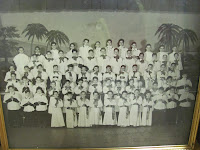 The red socks belonged to Msgr Voorhes’ uncle, Bishop Pius Benincasa, Buffalo's only bishop of Italian blood. He was also distantly related to Saint Catherine of Siena, as is the Monsignor,  “I’ve looked at a portrait of her and we seem to have the same dimple. Now is that purely  coincidence, or was it passed down through the centuries?”
Buffalo has fallen on harder times, the old industries disappearing,  the population declining,  several of the city’s great churches closed, including some built by other ethnic groups, Polish, Irish, German.   The museum has come at the right time,  before people truly forget – or stop caring.  It depicts not just a vanished Italian community but a vanished Catholic one - and a vanished America. 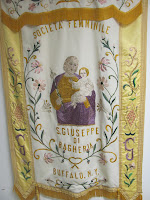 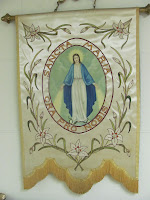