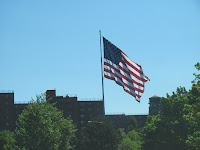 To my American friends. Sadly, we are having traditional British weather - perhaps as revenge.Rain, rain and more rain and the lawn is a soggy morass.  Our local town has admitted that the fireworks won't be up to snuff this year, as they can't afford it.  That's really going to bring in the crowds. Though some little girls heard about it and have been frantically fundraising, selling lemonade. Incidentally you can't buy your own fireworks in New York - you have to drive to Pennsylvania. The nanny state par excellence in action.
In honour of Independence Day I've just read the book de jour, "Revolutionary Summer" by Joseph J. Ellis.  Despite having been a historian in a previous life, I'm embarrassed at how little I know about the American Revolution. Or perhaps we got a quickie version in Britain.
Revolutionary Summer tells me that, in 1776, most of New York City was on the British side (well Western New Yorkers will tell you the Big Apple lot are still a law unto themselves). Hubby speculates that might be something to do with the Dutch connection, the Dutch preferring to trade rather than fight.  Secondly just how badly Washington messed up in his early career as commander of the American troops. He apparently had little concept of defensive tactics and preferred all-out attack in impossible situations. Well that was all going to change. The British of course messed up as well. If they hadn't been so heavy -handed, America might now be Canada.   The British forces also nearly won in 1776 but despite all the men and ships and firepower and the untrained American soldiers running away at every opportunity (all that was to change too) they still managed to lose. I suspect that, as with most freedom movements, America would in any case have won in the end. Another thing - the amazing erudition of the Founding Fathers, particularly John Adams, who read the Classics widely and studied Ancient Greek and Roman fighting methods to get some good ideas. Alas American education standards have gone down ever since. Plus, there's the wit of Benjamin Franklin, who refused to have anything to do with the Declaration of Independence as he didn't want to write something that would be edited by a committee afterwards. So Thomas Jefferson went ahead and did it and spent the rest of his life grumbling that they changed his immortal words. "Told you so", said Franklin. I sympathise with them, having suffered badly from sub-editors in my life.
Posted by Alenka at 11:47 AM