I'm always crossing this bumpy level crossing, or, as the Americans call it, "grade" crossing and never once have the gates been shut. Never once have I seen so much as the ghost of a train. Then, a couple of days ago, blimey, if the gates weren't closed, the red lights flashing and I realised there really are working railways in America.* 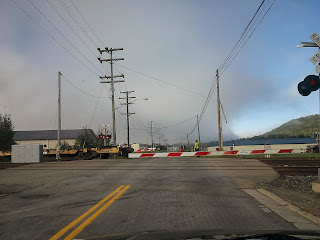 I wasn't the only one to be excited. This chap had stopped his car and was taking a picture. When I told hubby, he was incredulous. According to him, there are no such things as trainspotters in America.  My guess is that they exist but they're different, a little like twitchers, who tell each other about the arrival of some rare bird and rush off to see it. 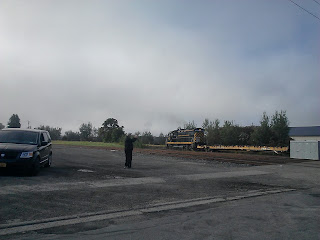 And there she goes.. the Western New York and Pennsylvania no less. It does sound romantic. Nothing like the Arcade and Attica steam train of course but there's something thrilling about the fact that it's actually out there working and not just preserved for tourists or in some old Western film. 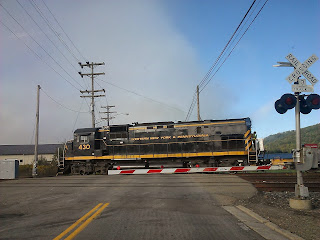 * this is a little poetic licence. If the wind's in the right direction, we can sometimes hear faraway trains from our house, with their lugubrious whistles. All freight trains these days of course. The station in Olean is now part of the Community College.  And some of the freight trains are extremely long, so I was lucky. This one was just an engine.
Posted by Alenka at 5:06 PM