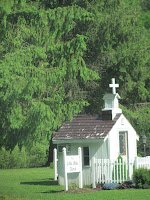 Some time ago, I was driving through a nearby village called Great Valley, when, right in someone’s front garden,  I spied a tiny white chapel. In the middle of an immaculate lawn, topped by a cross, flanked by flowers and two white benches, it looked built for Hansel and Gretel. A sign said, “The Little White Church”, with, underneath, the words, “Welcomes You.”  Did it actually mean that?  Could anyone just walk in?  Being British, I checked first. There it was on the web, “The Little White Church in the Dell”, claiming to be the smallest roadside church in America and indeed open to anyone passing by.
And apparently it’s not the only church vying for the “smallest” title.  Extraordinary, when you’d think Americans would like everything big, big, big, that they’re so fascinated by tiny churches. I had no idea before I came here that Find-the-Smallest-Church-in America is a pastime among travellers.  There’s even another contender in our New York state, on an island in a lake. It accommodates just two people but it probably doesn’t count as a roadside church, since you can only get to it by boat.  Then there was the one I drove past on highway 17 down in Georgia. “The Smallest Church in America”, it said,  “Where folks rub elbows with God”.  It had its own miniature bell-tower and had been founded in 1949 by Agnes Harper, a local grocer, who took out the deed in the name of Jesus Christ.  It was non-denominational but people had left all sorts of Catholic mementoes – rosaries, miraculous medals, St Anthony candles.  That church was 10 feet by 15 – space for thirteen people if they held their breaths, according to the publicity.
But I’m afraid western New York has Georgia beat. Our Great Valley church is five feet by eight, big enough for four worshippers, max.
The owner, Gail Archer, showed me the exquisite little interior. There were gilded cherubs, brocade cushions for kneeling by the rail in front of a crucifix flanked by purple velvet curtains, a frieze of angels around the walls, plaques saying “Count Your Blessings” and “Be Still and Know that I am God” , an old Bible open, with a pair of round spectacles placed on it and a clever device to start bell chimes ringing when the door opened.  Music played softly – Gail didn't have it on all the time but tried to watch for people approaching. And it was air-conditioned too. Outside, the Ten Commandments greeted visitors and wind chimes tinkled in the breeze.
Gail got the idea when she was cycling near Niagara Falls and came upon a similar tiny church. “Why, I’d like to have one!” she decided.  Hers was built a couple of years ago, with fifty people at the first service, sitting on the grass outside.  Gail told me it also hosted weddings. The neighbours were sceptical at first. “Do you really want people traipsing all over your yard?” but Gail went ahead anyway. She said she didn't want donations, for her, the satisfaction was providing a place of “rest and reflection”.
The other day, though, I noticed, the "Welcomes You" sign had gone. I hope The Little White Church is still open.
Posted by Alenka at 11:57 AM