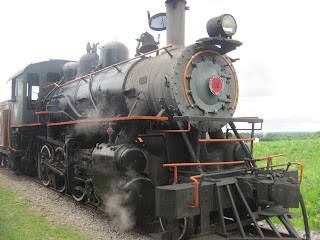 I’m a sucker for steam trains and it was a happy day when I discovered I could take a trip in one right here in Western New York.  We had some young relatives staying,  so that was my excuse - but to be honest,  I didn’t really need one.
It’s one of the paradoxes of America that railways, or railroads as they say here of course, were so important to America’s history and the country’s development  – just think of all those great scenes in the Westerns – and yet, these days, hardly anyone travels by train. It’s considered a bit of a joke. But give people a steam railway and they’ll come running. 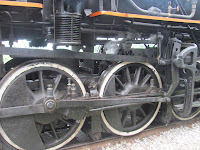 There’s not much in the little village of Arcade, save a couple of cafes, catering to the train-tripper trade but as we arrived, the refurbished ticket office at the “depot”, already had a long snake of families  waiting, marshalled by officials, dapper in old-fashioned peaked caps and waistcoats. 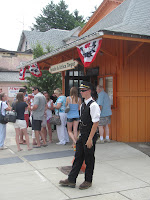 “No picnic coolers”, warned the sign. It’s hard to separate an American from his picnic cooler and the day was hot and getting hotter. There’d be cold Coke and popcorn on the train though – for a small extra fee.

The guards came in all shapes and sizes. 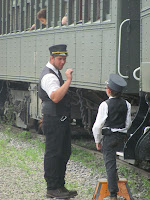 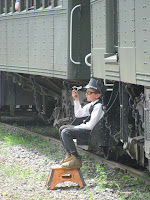 We walked out onto the platform where the vintage carriages stood ;  we’d been assigned to Number 311. 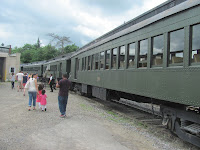 Technically, there wasn’t actually a platform. This train, like American trains of old, would travel  at street level through the town. You had to scale the heights to get into it. We settled into our vintage seats, with backs you could usefully flip forward or back, to face either way. National Rail please take note. 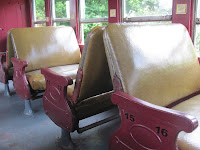 There was a small problem. There was no engine. Or rather there was one but it was away in the distance, being serviced.   We could see intermittent puffs of smoke but as yet no forward movement. 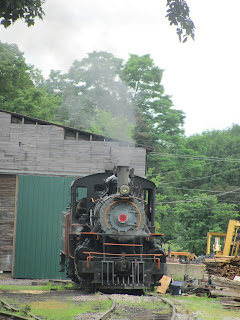 “There’ll be a very short delay” said a peaked-cap. 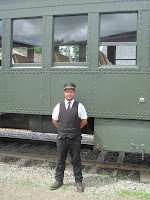 My heart sank.  Having done a lot of flying in America, I’m familiar with the “short delay”. It usually means you can kiss your day goodbye.  Or, in this case, get the substitute diesel engine, which would be a bit of a let down. 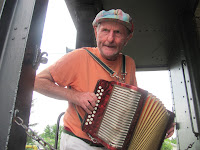 Meanwhile, a man with an accordion walked up and down the carriage geeing everyone up with  “She’ll be Comin’ Round the Mountain” and  “Old MacDonald had a Farm.” As he started that one,  a small boy jumped off the train, hotly pursued by Dad.
“Get back in here!”
“No! I hate that song!”
Some early trauma caused by the fabled farmer evidently trumping a train ride, the kid departed at a fair lick.
“You can block your ears. Get back in here!”
The kid reluctantly returned.
At last, the engine started to move, got attached and with a groan and the clang of a bell, we were off.
That’s a euphemism. We crawled. But it was a chance to wave to the onlookers with their cameras as we crossed Main Street and pulled laboriously out of town. 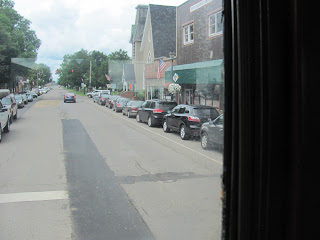 Smoke blew past the open windows – full of smelly memories for the oldies and a frisson of excitement for the kids. The railroad, ever mindful that America is the land of lawyers,  said it admitted no responsibility for sooty clothes. The train limped through fields of just-springing corn, past lazy rivers and thick groves of summer trees. Something moved among them and I listened for yelping Indians.  But it was just a couple of deer scampering away.
In the middle of nowhere, we jolted to a halt. There was a tiny museum with old telegraph and weighing machines and hot dogs and ice cream. The wheels got oiled... 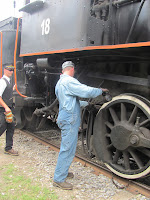 And I bought some rhubarb jam made in Yorkshire. Yorkshire, the village in Western  New York, that is. 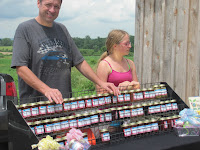 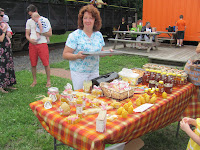 Then we all clambered up for the journey back.  The kids gradually stopped waving and started wriggling and I heard the first plaintive,   “Can we get off now?”  We nostalgia freaks had forgotten something:  steam train journeys could be a mite boring.
Still, I wouldn’t have missed it.  I expect that, in the future,  when they’ve learned to beam us everywhere,  Star Trek- style, they’ll advertise rides on slow old Boeings and Airbuses  -  complete with built-in delays of course.
Posted by Alenka at 4:35 PM