Encore: Where are the Bears?

No one puts it like the Americans. "The interaction between bears and humans was definitely up this year", noted our local paper, the Olean Times Herald quoting a forester at our local State Park.   This is probably not what he meant and in any case, if this fella was from the State Park, he was playing truant with a couple of friends at Spragues Maple Syrup Farm. 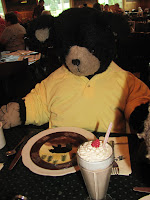 But I bemoan the fact that this is still the closest I've come to photographing an actual bear, or even seeing one. It seems that everyone has seen a bear but me. 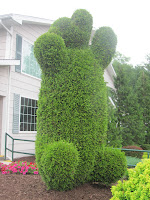 Apparently campers in the State Park were being warned of "high bear activity" (see above). 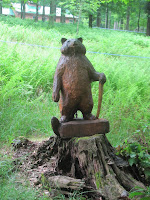 And of course if you get on the wrong side of an angry mother bear, it's no joke - though our black bears are not nearly as fierce as the brown bears and grizzlies you get in that mythical place people around here call "Out West".
But I would just like to see one at a safe distance, just once. Please................
Posted by Alenka at 8:35 AM