What's That in the Car Park? 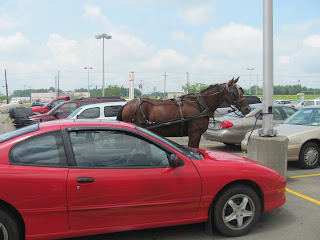 I did a double take. But actually, around here, it's not so unusual. Many Amish families have been moving in, taking over dilapidated farmhouses and starting new communities. Buggy signs have appeared on the roads. 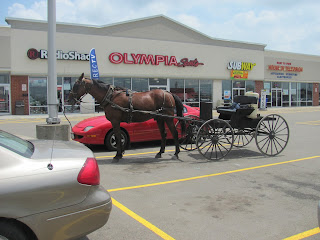 I’m always surprised by the contrasts of life in America. Yes, the Americans have consumerism and materialism and terrible television. But they also have the Amish.
The first Amish farmhouse I saw was neat, if slightly peeling, with a long washing line attached high up on the barn, on which hung wide trousers, shirts and aprons, all in shades of blue.  We knew it was Amish because there were no electric or telephone cables going to the house, no cars or tractors in the yard, just a couple of black horse buggies parked among the straw bales.  A hut outside had a handwritten sign:  “Baked Goods. Closed on Sundays”.  A girl came out of the house – she could have been any age from 12 to 30, barefoot, in a long dress of  heavy blue cloth, fastened not with zips or buttons, but pins. She wore a cap over her hair and spoke in an odd, German-sounding accent. She was polite but not effusive – very un-American. She apologized that there were only a couple of pies left but we bought what she had. As we left, a row of children, boys in straw hats and baggy trousers with braces, little girls in bonnets, waved shyly from the porch. I tell you those pies were the best I’d ever tasted.
The Amish, from the European Anabaptist tradition, are a Christian sect that believes in a humble, pacifist, family-oriented life, foregoing luxuries and modernity. Like many other religious groups, they found a haven in America, first arriving in the early eighteenth century. Now they live in 22 states and in Canada.
Our local western New York Amish are the Old Order  – the strictest. They have no electricity, cars, washing machines, telephones, though they can use a diesel engine for a lumber business, for example. Their clothes are always blue or black.  The men, once they marry, grow long beards framing their faces – but never a moustache. The children go to special Amish schools until age fourteen, when they leave to help on the farm.
Their life may look simple but the Amish have excellent business skills. They sell baskets, woodcarvings,  pickled beets, peach preserve, apple butter, vegetables – and build the best barns, which they’ll do for the market price and a lift in your pickup truck (allowed, so long as someone else drives).  The local tourist office issues maps showing which farms in the back roads sell what and reminding visitors to treat the Amish with respect, not to take photographs and never never to expect them to open up on Sundays. “Going to the Amish” is a popular excursion among our neighbours and people from much further afield.
And the supreme “Going to the Amish” experience is buying a quilt. At our favourite place, in an outbuilding warmed by a wood stove, was a massive bed,  piled with layers and layers of spectacular quilts,  in age-old patterns. The couple, Elizabeth and Levi, were a good team, he lifting each quilt, while she explained the one underneath. We chose one called “heart of roses’ – each rose petal exquisitely embroidered by hand. Elizabeth, in Dickensian black bonnet and stout boots, wrapped the quilt in a bin liner and gave us washing instructions – cold water and salt . She had a map on the wall in which she’d stuck pins marking where her customers had come from.  There were several pins in Britain. 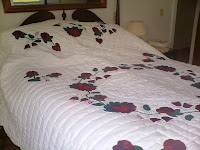 The Amish successfully and serenely manage to be both of the world and out of it. You can be driving on a country road and see an Amish horse and buggy trotting along at a spanking rate, complete with red safety triangle on the back. (Unfortunately there have been collisions, especially when people don't know to expect them.).  We saw an Amish couple at an auction, cannily buying up those old sewing machines you work with your feet.  They pay for their hospital treatment in cash – reputedly getting a good deal.  They’re law-abiding, peaceful and pay their taxes. And people admire them for sticking to their principles.
But I wish the Amish family who had a stall at our local farmers' market would come back - they sold the most delectable doughnuts.
Posted by Alenka at 11:40 AM