At this time of year, you can't get away from the things. 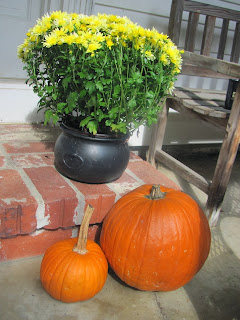 No matter that they taste of nothing much and all that orange begins to pale after a while, WNY in autumn just wouldn't be WNY in autumn without oceans of the lurid globes littering the roadside, hoping to con travellers out of a few dollars. 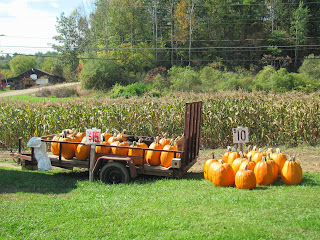 There is a limit to what you can do with them.  Carve 'em, put 'em in pies for Thanksgiving, make soup out of 'em. But you have to hack your way through first. In Olean they have a pumpkin-throwing contest and round about this time of year the police step up their patrols to catch bored people chucking them off road bridges.
And there was of course the memorable Great Cattaraugus County Pumpkin heist, which, to avoid repeating myself, you can read all about again here. 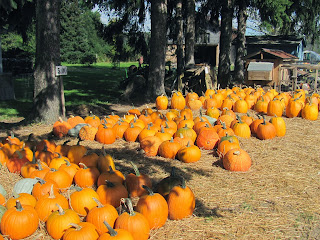 You'd think there was nothing new to say about pumpkins - until yesterday. We were driving along highway 219 when we spied this. 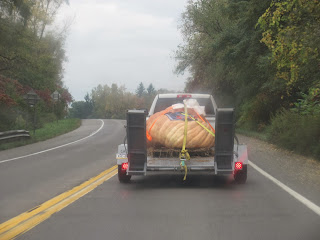 After some discussion between hubby and myself as to whether it was a rolled-up mattress (his idea), or indeed a giant pumpkin (mine). We tried to inch a little closer. 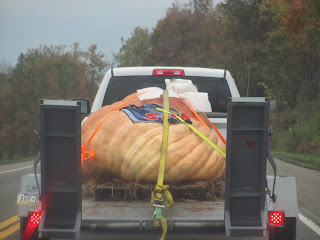 And get up alongside him.... 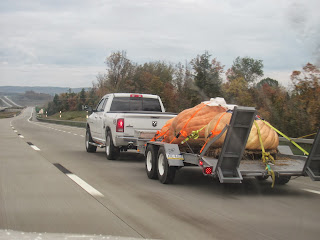 Until finally all was revealed. Oh my lor'!  Three of the brutes! 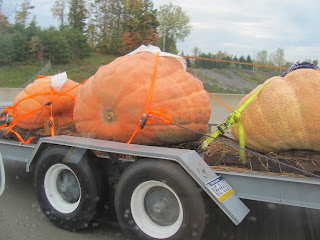 That's another thing you can do with them. Enter giant pumpkin contests.
Posted by Alenka at 4:37 PM