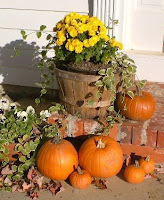 America has a love affair with pumpkins. And currently, the orange globes with the slightly comical image are entering the last few days of their lifecycle. Turned into Jack o' Lanterns at Hallowe'en, and latte flavouring at  Starbucks' (so popular, apparently, that they ran out) they're about to start filling pies for Thanksgiving.  I have never really seen the point of pumpkin pie, though  I feel I have to whisper this because they are such a significant American icon, bound up with feasts and holidays and Pilgrim Fathers and so on.  I don't think pumpkin has any kind of flavour at all, so cooks over compensate with cinnamon - a far too freely used American obsession which, along with aggressive air-conditioning, is one of the few things I really dislike about this country. Actually I doubt, though I'm happy to be corrected, that many people use real pumpkin innards for pumpkin pies. The tinned stuff is so much easier. But for Thanksgiving, they pies are, unfortunately, a non-negotiable.

Pumpkins are said to be extremely easy to cultivate, swelling and ripening at ground level and rather furtively under bunches of leaves until they suddenly burst into view in all their glory. I have never tried growing them, although iI've been told manyh times that any idiot can do it.  You can just leave them, apart from occaisonally turning them over so they don't get flat on one side.
In October, you can see acres of pumpkins out for sale by the side of the road in all different sizes. I don't know what happens to the ones left behind; they must fill some huge landfill. I feel I'm honour bound to purchase a few to decorate the porch, where they sit, to put it candidly, gently rotting until they get thrown on the compost heap or, in the case of porches owned by the less public-spirited, hurled out on the street to be squashed and pulverised by cars, leaving a nasty mess.
Around here, pumpkins have also developed a slightly louche image, having been associated with some criminal acts, such as there are in our peacable neck of the woods. The police apparently set up special patrols to catch people whose preferred autumn pastime is throwing pumpkins off road bridges and onto cars, to see if they bounce.
And the most notorious pumpkin-related crime happened a couple of years ago: the Great Cattaraugus County Pumpkin Heist. A chap, wondering why pumpkins were disappearing at a considerable rate from his pumpkin patch, lay in wait and was rewarded by seeing his neighbour routinely pinching them. The police apprehended the culprit and in searching his property found thirteen-hundred dollars’ worth of pumpkins stashed away. With pumpkins retailing at about ten dollars locally, that was  an awful lot of pumpkins. Perhaps he was planning  to unload them in Buffalo, where, for all I know, they’re like gold dust.
But he got a double whammy because,  diligently searching his property, law enforcement also happened on a patch of flourishing marijuana plants.  Not the brightest thief in the business.
Posted by Alenka at 7:36 PM