A WNY Sailor's LIfe: Sun and a South Wind 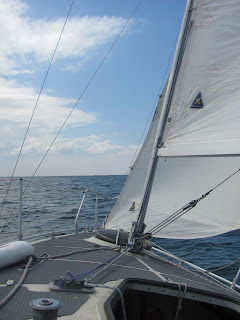 Today found us making the most of one of the last hot summer weekends, sailing our little boat on  Lake Erie. An hour and a half's drive northwards to Buffalo and the marina isn't that far by American standards, I've found. It's positively around the corner.
The vastness of Erie - one of the Great Lakes - is like nothing I could ever have imagined in Britain. (Nor for that matter would I ever have imagined that, thanks to hubby, I'd become a sailor.) It's a sea, really, with waves and white caps - beaches too, if you want them. Here the British and Americans fought to the death in the war of 1812 - a story for another day
We had a rare and beautiful south wind which had come bowling over land and had only just got up speed, so the waves were still low - conditions our small craft loves. So we fairly galloped along westwards on a perfect beam reach, past the woods and beach houses on the Canadian shore to starboard, behind us the Peace Bridge that connects us with Canada - and beyond that the Niagara River flowing down to the Falls.  Keep that up non-stop and we'd get to Toledo, Ohio at the other end of the lake, in a couple of days. We thought for a split second we'd even overtake the big catamaran that takes out joyriders, sponsored by the local TV station in Buffalo. Until we realised she was coming towards us. But no matter. Sailing isn't all fierce rivalry.
Unless you're talking about powerboats.
A boat called "Stress Knot" roared past us. (Why do boaters like these dreadful puns? We've got "Sea's the Moment" and "Aqua Maureen" among others in our marina) I yelled, "Speak for yourself!" as he sent us rocking and rolling in his wake, blissfully oblivious. Sailing etiquette here demands that sailors don't wave to powerboaters. I thought that shocking at first but I'm beginning to understand.
Posted by Alenka at 5:21 PM