The Language Barrier Part 2: The Garden is Not What it Seems 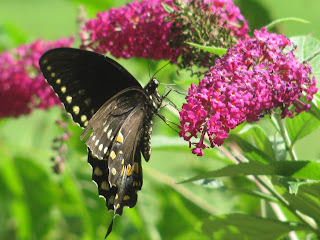 As far as I'm concerned, I've got a garden.  Most of it might be a jungle of wild roses, brambles and goldenrod, impassible until our friend Joe came with his brush hog and mowed some paths - trails, as they call them here - but it's still a garden. And the part near the house really is starting to look a bit like one - aiming, as I am for the English country cottage look, which includes weeds, so long as they've got blooms on them somewhere.
But this is a situation ripe for misunderstanding. To my American neighbours, a "garden" is a vegetable patch - or, occasionally, a flower bed. People here, where acreage is plentiful and cheap, tend to have vast expanses of unfenced lawn around their houses, which they spend hours noisily mowing, with, perhaps, if they're so inclined, a clump of flowers strategically placed somewhere.  All that land around the house - well, that's a "yard". Which to me smacks of dinge, old tin cans and prisons.  I just can't bring myself to say the word.
This was all brought home to me when we had some little nephews come to visit.   "Why don't you go and play in the garden?"  I suggested. They gaped at me with the sort of incredulity  that our old tom cat once exhibited when a bird fell down the chimney right into his basket. Stunned with the sheer joy of anticipation - of trampling and footballing unpunished through the blackeyed Susans -  their eyes swivelled towards their mother. That was fortunate because she had the chance to interpret, "NO!! - she means the yard!"
Posted by Alenka at 7:07 AM