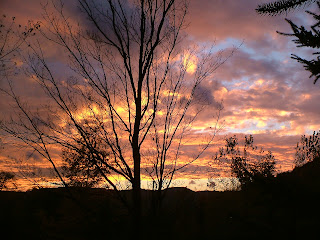 It was a balmy evening with just a hint of thunder in the air, as hubby and I dusted off a couple of deckchairs and headed for a patch of grass outside the building grandly called the “Recreation Center”.   We joined mums and dads, grandpas in shorts and baseball caps,  unfolding their nylon chairs with the cupholders in the armrests, or spreading rugs on the ground, accompanied by kids, dogs and insect repellent –  I mean bug spray.


We were all there to hear the Allegany High School Alumni  And Friends Band, currently unpacking its tubas and trombones and settling itself, if not exactly on a stage, on a piece of grass near the building so we could all rush inside if it rained.


The Alumni and Friends Band started off as a bunch of old classmates.  These days, their hair is  sparser and their girths wider than they were back in the day,  probably longer ago than most of them care to remember,   when they graced the classrooms and sports fields of our local high school.  They started the brass band as a sort of hobby and  a way of keeping in touch. But they’ve got far more than nostalgia value.   Take it from me, they are seriously good. They play every couple of weeks  on summer evenings for anyone who wants to listen, just for the fun of it, the music laced with a bit of friendly  banter.  They love what they do and they don’t charge a penny for it.


The evening kicked off with the National Anthem, which is always slightly awkward for me, as Americans  not only stand up but put their hands on their hearts in a rather touching way and being foreign, I can’t really do that.  I worry that people who don’t know me might think I’m making some sort of silent protest.  No American in this part of Western New York wouldn’t put  hand on heart.  It would be unthinkable.


Then the performance proper was up and running with a blood-racing Sousa march, followed by the “Carnival of Venice” , including a trumpet solo.  The conductor announced Jason, the soloist,   “One of the finest trumpeters I’ve ever known – er, what was your name again?”  And everyone groaned and  chuckled.


Next was a special from the trombone section,  “Directed by my accountant – and he charges too much!  Dennis, do you want the microphone?”


Of course not, since it was  “Amazing Grace”  and the audience closed its eyes and smiled wistfully and some birds in the trees couldn’t help but join in.  We could have been round the bandstand at some old, genteel  British seaside town – except there wasn’t a bandstand.


Then there was  a slow, languid, jazzy number and then, inevitably,  “America the Beautiful” and finally it was time for the last tune, “I think you know what the last tune is – we’ve only done it for the past  twelve years”.


And off they went with “The Stars and Stripes Forever” and everyone tapped their feet and clapped along and then it was time to go home – with a reminder  that  St John’s Church was laying on hot dogs and free ice cream.


Hardly an evening to make history but it’s  nice to think that there is a kinder, simpler, gentler America and we’re lucky here that we don’t have to look too far to find it.