Western New York Idyll - about as good as it gets 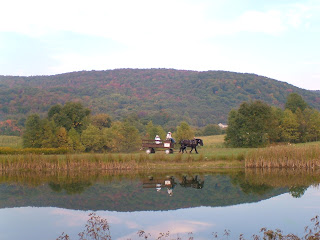 There are some days,  here in Western New York, when it’s really wonderful to be alive. One such day was back in June ....

It had been a long time since I went riding up in in the hills, with my friend who owns a few horses. She’d put her back out and was gradually getting back into things, so the horses hadn’t had saddles on for a while. They were a little perplexed as to what we had in store for them.


Ellie May, the big paint mare (in Britain we would call her a skewbald) rolled her eyes,  wondering if she was about to be taken to the knackers.  Star, the aged quarter horse, built to race at speed over a quarter mile, though those days are long behind her,   was more of an old pro but even she looked  worried.


As the sun moved in and out of plump little clouds dancing across an early summer sky, straight from Winnie-the-Pooh, we ambled out and up the lane. It was so like an English country lane,  though,  in the American way,  straight as a Roman road. We made a detour to avoid a well-drilling lorry in case Ellie May threw a fit on seeing it. My friend’s son  is building himself a house.  In these parts, digging your own well goes with that;  you can forget about mains water and anyway, well water, like ours, is pure and delicious. We sometimes think we ought to market it.


We turned into a meadow, riding waist deep, just like the early settlers, in the days when they said you couldn’t see the horses’ ears above the waving grasses.  My friend’s two dogs,  a chestnut-coloured, curly-coated Chesapeake Bay Retriever and a feisty pug- Jack Russell cross,  dashed through grassy tunnels, with only the waving surface betraying their passage.


Around us were views that can’t have changed much in a few hundred years. Forested hills receded into the distance, dotted here and there with the occasional red barn. Tiny sprouts of green corn were coming up in the fields. By late summer,  they’d be a forest. Tall metal silos were the only evidence of modernity.


We rode through narrow trails, overgrown since we were there last, having fun dodging the prickers, the rampant multiflora roses that run wild over the countryside – and my garden . Only at this time of year,  when they’re full of delicately-scented white blooms, you can forgive them.  We rode between vast banks of a wildflower called Dame’s Rocket, pink, purple and white, more prolific this year than I’d ever seen them.


We hacked our way through undergrowth,  plunging down a bank into a mountain stream that trickled over stones and rocks and wading through the deeper pools. Fallen trees barred our way but the horses  stepped and scrambled over them,  gradually accepting that they were back to their  old, familiar working lives.


Then on past a grand wooden house owned by some rich Canadians who come over the border from the flatlands around Toronto,  to ski in the winter. It has a large bronze statue of a howling wolf in front,  which always makes me jump. The horses always seem to ignore it though.  They’re not stupid.


In the past,  we’ve often startled white tail deer in the undergrowth, even, once,  a nesting wild turkey that famously flew straight up under the horses’ noses and sent them hell for leather into the next county. But on this idyllic day all was quiet, except the sound of a couple of wild geese honking overhead as we burst out into the meadow again.


Then  it was back to the barn and the horses,  kitted out with high tech nylon fly hoods  (lucky them - in the old days they had to make do with manes and tails), turned out to pasture, kicking up their heels  and cantering off, tails flying. They seemed glad to be alive too.