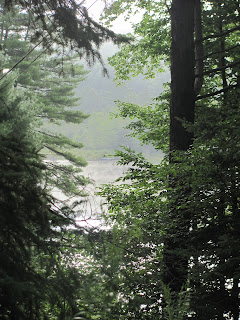 We live on a country lane, the sort that, in these hilly parts of Western New York, is called a “hollow”. From a wide, flat valley, it rises upwards through forests of oaks and poplars and sugar maples, then downwards again into the next valley.  It’s named after an early settler who was the first to build a house here. You can still see it on the old maps.


The lane leads up past increasingly isolated houses , past the end of someone’s drive embellished by a joky, rustic, wooden deer statue that  wears a swimsuit or a muffler and ski hat, depending on the season, past  the “hunting camps”, cabins used in November for deer-hunting  and past a forest-fringed lake. Here, the road gets rougher. It used not to be paved at all and it’s still an adventure to go over the hill through the winter snow and the spring potholes.
It’s not all paradise;  higher up are rusty trailers surrounded by old cars and junk  – rural poverty is never very far away here.   And recently they've put up "40MPH" signs. Since they paved the road, it's been discovered. Dogs can no longer lie sunbathing in the lane and get away with it.


Our lane makes for a good workout  and I puff up it and run down, drinking in nature in all its glory.  I’ve had deer cantering across the road in front of me and chipmunks rushing about their business; the strange sounds of kissing in the bushes are their warning signals. Once, I spied a large, fat porcupine heaving himself up the bank.
On some mornings, it's almost painfully beautiful.  At this time of year, when the sun starts to pierce through the early morning fog, clouds of mist roll over the lake and through it. one day, I saw a group of ducks paddling, spotlighted in a shaft of sunlight, like ballerinas mincing through dry ice.

Running for the bus in London was never like this.
Posted by Alenka at 8:11 AM