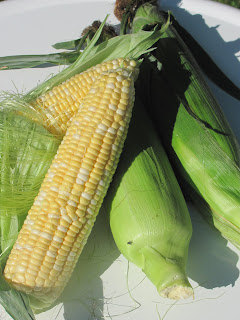 Sad to think the corn season will soon be over.  And our favourite farm market will be closing at the end of the month. How will we cope?
No scene could be more rural Western New York at this time of year than the cornfields with their tall, bristling rows of the iconic plants, fat, succulent ears all ready to picked.
It's been a dodgy year for corn, what with the drought and then the thunderstorms. We're lucky here, though. It's not nearly as bad as it's been for the mid-west.
Of  course,  I mean corn in the American sense, the “on-the-cob” variety, introduced to the early settlers around here by the Iroquois Indians.  It’s one of  the major local crops, growing well in rocky soil and uncertain weather.
There’s the sort they call “Indian corn” which is brightly coloured but not much use except for those twee autumn wreaths I can now tell you are called “ Ready-to-Hang Fall Décor”. There’s the sort which gets ground up and fed to the cows. Then there’s sweetcorn,  the kind you eat.  And believe me,  if your previous corn experience has meant, like mine in London, getting it shrink-wrapped from the supermarket, or lurking in a bought tuna sandwich, you just haven’t lived.
Hubby, the corn connoisseur, claims the only right way to cook corn so it’s supremely fresh, sweet and juicy is to start boiling the water and only THEN leg it to the field to pick it.  But since we don’t have a farm and don’t want to start yet another feeding station for the local wildlife, we get our corn elsewhere. Every Tom, Dick and Harry seems to have a roadside stall but the stuff at the farm market is the very  best (don't tell - they bring it in a from a place further north which has fancy irrigation.).

At the farm market, you can spot those in the know by the intellectual conversation: “Jackpot’s good this year”  “Any Bread and Butter yet?”  “How’s the Tuxedo coming along?” “What, Silver King already?” These are all varieties of local corn, some yellow, some bi-coloured, some white, and everyone has their favourite.
There’s also corn etiquette.  Do you brave the stallholder’s beady eye and, before buying,  peel off the layers of papery leaves and fiddly, silky fibres to make sure one of God’s smaller creatures hasn’t got there first? If you’re interested  (and if not, please look away now) you can spot such quaintly named blighters as corn earworms, fall armyworms, European corn borers (ok so it’s all our fault then), and plain old slugs.  I’m usually too much of a coward.
But if your corn is unsullied, prepare to be delighted.  Cook it, smother it in butter and eat away. Simple, really. Well actually it’s not that simple. To get the full experience, you're apparently supposed to get the kernels off the cob with your teeth without actually biting them, choosing either the “typewriter” method - one row at a time, working left to right, or the “search and destroy" method – spot the choicest kernels and just go for them.
The one drawback with corn is that it sticks in your teeth something awful. Which probably explains why Americans are so keen on dental floss.  Meanwhile, we're besieging the farm market to get the last of their supplies, stuffing ourselves with corn, corn and more corn, trying to hang on to the experience.  The season is so short and it's worth it.
Posted by Alenka at 11:09 AM