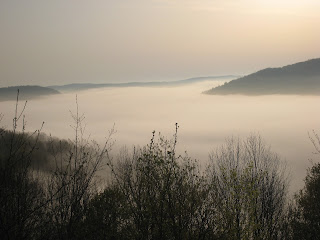 Foggy mornings now and the valleys packed with cloud like cotton wool in a giftbox.   And full of surprises too.  Drivers in Cattaraugus County drive in fog with no lights. Or at least every grey car does. They think, if they can see, it's OK. Turning out of the bottom of our lane becomes an exercise in winding down the window and listening hard for somebody coming.  I composed letters to the local press in my head until I saw a State Police car doing it too.  It must be another American custom, so I'm powerless.
It was on just such a morning, a couple of weeks after I'd first come to live in America, that I was following hubby's car into town.  Suddenly, I saw that he’d stopped by the side of the road.  Puzzled, I pulled in behind him and a split second later, CRASH, something hurtled out of the cornfield and  hit my car. I stumbled out and saw hubby sadly eyeing his beloved Volvo, like mine, buckled beyond repair. Incredibly we had both almost simultaneously fallen victim to Western New York’s variation on the kamikaze,  which here comes with four legs apiece and waving white tail.  We were in good company: in a recent survey of local drivers, 55.7 per cent said they’d had a collision with a deer. Deer-hitting stories abound like fishing tales –  but double whammies like ours are unusual and did wonders for my reputation.  Of course it's one I'd rather not have. I still have the townie's attitude to animals and probably always will.  I was left wondering what sort of country I'd landed in. Safe in the urban jungle of London, I would never have predicted this.
But what to do? Old-timers lament the demise of hunting as a father-and-son bonding sport.   Random warning signs with a pictured leaping deer decorate the roads but are futile - although  I heard of one old lady who argued with the workmen putting one up by her garden. “You take that down! I don’t want any deer coming here!”