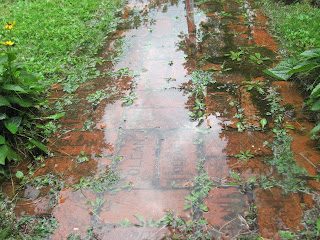 At least, here, we’re through with the heatwave. For now.
Phew, what a scorcher!  It wasn’t as bad as some parts of the US but we had weeks of heat -  dripping, suffocating,  perspiring heat. I have a theory that Britons are better at tolerating heat than northern Americans.  Look how they ruled India in pith helmets and crinolines and how they head to  Spain and Greece for their summer holidays in temperatures that would send my American neighbours climbing the walls.

Americans just cannot live without their air-conditioning and there were tales of people riding round and round on the New York subway all day, where they could be cool at least. (It wouldn’t work on the London Tube).


The Friday when it was at its worst and with a houseful of guests, our freezer seized up.  The job-lot of bison burgers we’d just got from the buffalo ranch was rapidly thawing, with the prospect of eating  nothing but bison burgers for the foreseeable future.  If I never see another bison burger again, it’ll be too soon.


That, however, was nothing to what happened on Saturday.


The heat had reached such a pitch that even I was gasping and rolling my eyes. Then the thunderstorm broke. It was only a thirty-minute thunderstorm but it managed to pack more into that thirty minutes than the Fourth of July fireworks across the length and breadth of America all going off at once. We watched from the porch as three, four, five lightning bolts shot down from the sky simultaneously, followed by a crash that nearly blew our ears off. Then another. And another. The house shook, the garden path turned into a lake and  the gutters into Niagara Falls. Trees bent almost double and the rain blew horizontally, drenching us to the skin.
As suddenly as it had come, the storm was gone, speeding towards  town. Then the power went out.


We get power cuts here, in this neglected part of the world’s superpower, where electricity still travels on a Heath Robinson arrangement of flimsy poles and low overhead wires – and we have got a generator.  The catch was,  we couldn’t start it.


“Pray!” I urged hubby, heading to the shops to get some supplies to supplement the bisonburgers - something we could at least cook on the barbecue.   Town was a scene of devastation. Flashing police cars surrounded powerless traffic lights,  sweating policemen directing the traffic.  Roads were closed. Whole trees had come crashing down.  I called hubby and miraculously, he’d managed to start the  generator.   So we ended up trying to cook all the rest of the food in the already defunct freezer on a combination of the microwave and an old gas camp stove,  unearthed from the basement, which hubby  started up with boy-scoutish glee,  while everyone else cowered back in terror.
Such is hardship in modern America.


Meanwhile, Father Ed at St John's gained some celebrity by preaching, arguably, the shortest, snappiest sermon ever (certainly the shortest in America). With no power and even the ceiling fans dead, the  church for the Saturday Vigil Mass was like the Black Hole of Calcutta.  “I expect you’ll all be wanting to get home,” said Father, “So I’ll be quick”. And he was:
“This morning, when we got up, it was hot. At lunchtime it was hotter. This afternoon it’s even hotter. There’s only one place hotter than this. STAY OUT OF IT!”
Posted by Alenka at 6:59 AM