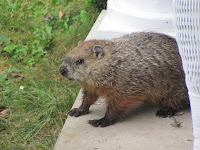 I was at the hairdresser today, which is my fount of local gossip. Apparently some woman from "somewhere near New York City" (that needs to be said with a hollow laugh) has moved in locally. She came into the salon in a state of shock, saying that woodchucks had eaten all her flowers. "Welcome to Western New York!" said the gals.
There followed an exchange of horror stories of which mine were, though I say it myself, some of the most exciting. Take the blueberries. One year every single last  one was gobbled up by turkeys. The following year, every single last one was devoured by chipmunks.  This year, the sweet little rhododendrons I had been nurturing for a couple of years (special offer from Home Depot at 4 dollars each) have been eaten by deer. And to think they'd just started growing! That's the fun of living here; you never know what to expect.  Someone will always find something you haven't put a net around.  Can a rhododendron survive without leaves?  The hairdresser thought maybe. In my usual exhibition of the triumph of hope over experience, I'd been out to buy another one, checking first that it was hardy to minus 25F. (Yes F, not C). So much I have learned.
"At least it wasn't bears", said the salon gals.
Posted by Alenka at 6:43 PM