Of Spice and Sauce and Keeeeenwaaaa

It's here - Olean's answer to the Ideal Home Exhibition, only it's called the Home and Garden Show and is taking place this weekend in the ice hockey rink, which has been purged of ice for the occasion, though it's still darn cold. "We keep going outside to get warm", shivered the girl in the short-sleeved T-shirt at the admissions desk. Not that she was getting much joy outside - it's been miserable and dripping with rain. The first outside stall was manned by a chap trying to flog solar panels. I ventured that he probably wasn't getting much business. "Yep", he said,  "It's been kinda slow..."
Inside were an array of local plumbers, builders, landscapers and other people, not a few of whom we've done business with at some point with varying degrees of success.
"Our lawn's still full of weeds", I protested to the man who'd come round and sprayed last year. He looked at me pityingly. "Think you can fix it in a few months?"
But this is America and at any event like this, you're guaranteed solace in the shape of something edible.
There was Jon,  chef at the local hospital, cooking up an appropriately nutritious meal. 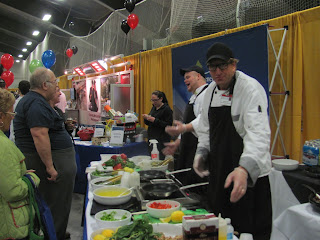 He asked if I frequented the hospital. "Not if I can help it", I said but tucked into his proffered creation, which sounded like a trot through a health food paradise: spinach, edamame and quinoa, which is pronounced keeeeeenwaaaaa, a sort of Aztec grain which tasted much better than the keeeeenwaaaaa I coincidentally tried to cook for hubby last night. I wrote down Jon's secret, tarragon and lemon juice. It's almost worth being taken to hospital for. I said almost.
On another stall was fiery sauce supremo Jeffrey, who described himself as Chief Pepper Head  of the frighteningly-named Burning Asphalt Sauces PLC. 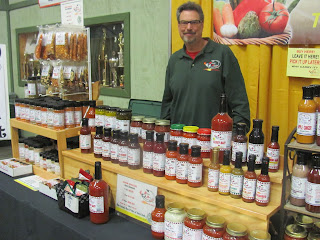 Hot sauces are an American idea I am gradually coming to terms with, terms that is, like chipotle and jalapeno. I daren't admit I actually don't know what they mean. But I am beginning to develop a sneaking liking for them. I went home with some Apple BBQ (trans: barbecue) sauce, which ranked zero on the helpful hotness scale attached to the bottle. You could have fooled me. It was good though. A rather nice touch is that some of their proceeds go to "Sauces for Soldiers", to provide overseas troops with "a little taste of home".
And talking of names, I just have to get this in. One of the show's sponsors is a local accountancy firm called Buffamante Whipple Buttafaro. It sounds positively mouth-watering.
I confess that the Apple BBQ Sauce was not the only thing I went home with. I also purchased, at special show price, an "air chair" which is like a hammock with natty wooden arms - if summer ever comes we'll have to think of somewhere to hang it where the turkey family won't see it.
Posted by Alenka at 8:42 PM