We are staying for Easter Week in a place outside Columbus called Easton, with apartments supposedly based on London's Regency terraces, offering an "Old English" lifestyle. 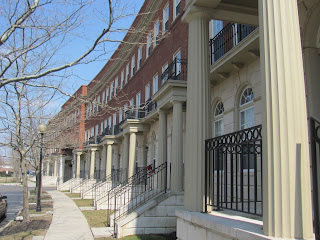 They are a little like Potemkin villages; the backs are not so salubrious. (This might well be the last bit of snow left in Ohio).


And if you look too closely at the fronts, they're not exactly up to Nash's standards. But never mind, the door is almost like Number Ten's. 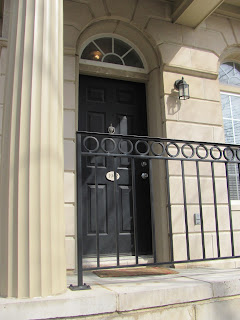 Across the road is something even more extraordinary, according to someone we met, the second most profitable shopping mall in the Mid-west. This may or may not be true but I wouldn't be surprised. Since my normal Cattaraugus County retail therapy dilemma is  weighing up the relative attractions of Walmart and Kmart, my head is spinning. I am like a kid in a sweetshop. It's a positive cornucopia of riches, filling 90 squared and fountained acres. From Trader Joe's to Tiffany, Banana Republic to Barnes and Noble, Lego to Louis Vuitton, throwing in a Macy's, a Nordstrom's several interior design emporia and a swanky Hilton, not to mention more cafes and restaurants than you can shake a stick at. And once you've taken your life in your hands crossing the six-lane highway between the flats and the shops, (they give you just over 20 seconds, counting down menacingly)  along which cars race at Indie 500 speed, you can walk everywhere with the minimum of hazard, except to your credit card. 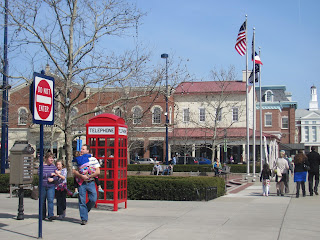 And yes your eyes are not deceiving you.. 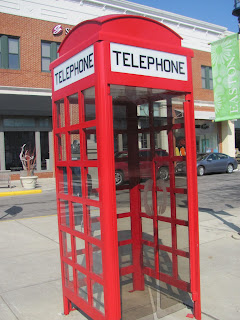 It's built, I suspect, a little broader to accommodate Americans. And there are other subtle Old English touches 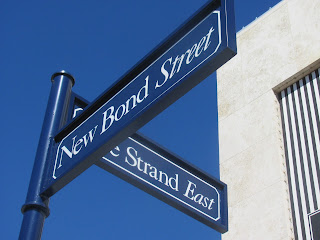 They are even geared up for Old English weather, kindly providing umbrellas. 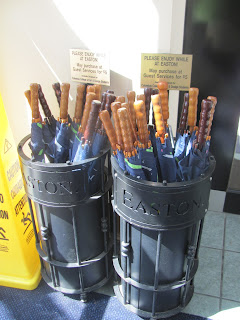 Though it appears that all is not as rosy as it seems. Judging by the copious rules, 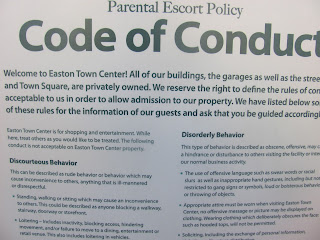 they have something of a potential hoodie problem here. In daylight, as in many such places, all is friendly, bustling prosperity, families and fun and businesspeople meeting for leisurely lunches; at night the boys and girls, given the opportunity, will come out to play.  Indeed in 2011 a teenager was shot dead here, caught in a showdown between rival gangs.  Stern action has been taken to preserve the Paradise; another local joked that every second shopper you see is a security guard. But as a Londoner, I can remind them that, in Old England, a Dickensian underbelly lurked beneath the charm.
Posted by Alenka at 7:36 PM