I passed up another puddle-jumping experience and hitched a lift with hubby.  It meant a circuitous country route to go back via Bradford Regional Airport to pick up my car. There were still no planes there. But on the way we stopped at a rest area we hadn't seen before, with something to cheer it up. 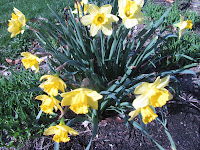 A few daffs and this chap... 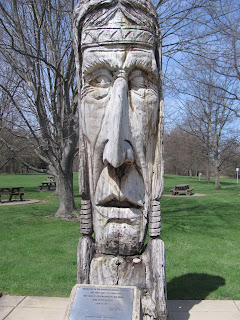 who on balance doesn't look that cheerful but who can blame him? The plaque underneath says, "Dedicated to the American Indians (Seneca) ... But they won't be forgotten but will be remembered in our minds and in our hearts. Love is Life. " and is signed by "Peter Toth, June 30th 1973". (Peter Toth, it transpires, is an Ohio sculptor born in Hungary who has carved  anumber of such images of Native Americans.)
The Senecas on our local reservation are these days known mainly for a large, ugly casino that just keeps on growing and exploiting the simple-minded and for holding up repairs to the motorway that runs through their land, which is why it has so many potholes.  They deserve better.
Posted by Alenka at 6:56 PM