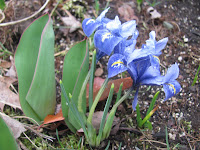 One of the happiest sounds of Western New York early spring and I've heard it at last!  It was a couple of days ago when I was out on the porch - the day had got a bit warmer when suddenly, it began. The peeping of the spring peepers, tiny frogs, living through the winter in a semi-frozen state, practically dead and now just emerged from the primordial mud of our neighbour's pond. Their noise is like a million-strong chorus of sleighbells,  echoing around the hills. When the trees are bare, when hardly any flowers are out, when the grass is grey and matted and the roads still caked with with salt and grit, the spring peepers are nature's most potent sign of resurrection. And appropriately for the season, they even have crosses marked on their backs (their Latin name is Pseudacris Crucifer).  But it's no use trying to spot them. They are as elusive as spirits. Children go down to ponds at early dawn with torches, hoping for a glimpse but in broad daylight, I've never succeeded. I hear an almost deafening sound and follow it. I get close and it stops. Just like that. On mild, spring evenings I call hubby out to the porch, "What a racket out there!" we smile at each other.
Posted by Alenka at 3:45 PM