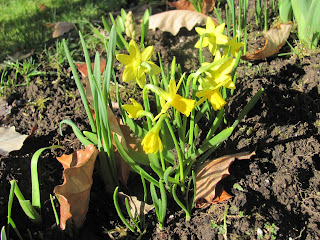 A day bathed in sunshine and at last some brave narcissi flanked by last year's leaves blown off the young oak tree, which means it's started sprouting. And the air finally smells like spring.
TV commentators briefly took their eyes off Boston to enthuse about the Thatcher funeral, "Beeeoootiful!  And the Queen of England was there!  The British sure know how to do these things!" That's right, we do.
And talking about Boston, one of the sweetest gestures to cheer the city up - the New York Yankees baseball stadium played "Sweet Caroline", which is the Boston Red Sox song, their deadliest rivals. Rather like Old Trafford playing "You'll Never Walk Alone".
Tomorrow I am off to Ohio again, on an itty-bitty (hubby's expression) prop plane, or two of them. And thunderstorms are forecast. Watch this space.
Posted by Alenka at 8:41 PM