It's Going to be Bumpy, Ma'am

I was drinking my coffee when a lady official puffed in. "Ma'am!" she called out urgently. "Ma'am, we're going early. Please could you go through Security now!"  I scooped up my stuff. Where was security?  The three delighted TSA officials pointed to a narrow door into a tiny cubbyhole. Then all three came in and surrounded me solicitously.  I was sure they were going to want to search my bags. Why pass up such an opportunity? I was probably the first passenger they'd seen for weeks. I was right. After a while they were  satisfied and finally let me go. Well I suppose in view of everything else going on up north, they were a little nervous.
The charming young man directed me. "It's going to be bumpy, Ma'am." he warned. The pilot looked about 15 years old but I'd seen him land, so I supposed he knew what he was doing.
"It's going to be bumpy, Ma'am", he said.
"Am I the only passenger?" I ventured.
"No Ma'am, there is another gentleman on the plane." And he added as an afterthought, "Please could you sit in rows six, seven or eight, for reasons of balance."
The plane, a diminutive Beechcraft, or, as Americans say, a "puddle -jumper" was a mite dark inside. It was like walking through a kitchen roll tube. The other passenger turned out to be an athletic looking 20-something. He was also white as a sheet. "It's going to be bumpy", he whispered.
"Did you come in on this plane?" I whispered back. He nodded, as if admitting he'd just escaped the jaws of hell.
The safety announcements on a Beechcraft are more exciting than on a dull old Boeing.  For one thing, they tell you how to use a  fire extinguisher.
After a reminder to fasten our seatbelts very tight, the pilot revved up and off we went.
That little plane bucked and jumped and bounced and whirled and plunged.  The other passenger gripped his knuckles together and seemed deep in prayer. I myself was doing likewise but, determined to keep a stiff upper lip was also grimly tried to attack the Wall Street Journal crossword, which is my best remedy for keeping calm on planes.
But eventually we landed  safely in Cleveland. The pilot looked nonchalant. Well two could play that game. "That was enormous fun," I said. 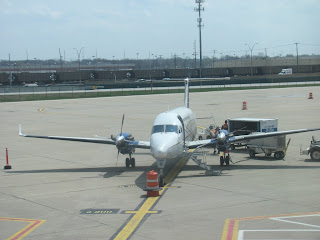 And after that, our next prop plane from Cleveland to Columbus felt like a jumbo jet.
"It is", said the stewardess, as we taxied off, "going to be more than bumpy."
Actually for a seasoned puddle-jumper flyer like me, it was a piece of cake.
Posted by Alenka at 8:32 PM