I was flying to Columbus, Ohio, for a family celebration. Hubby had already driven down there on business and suggested I might hop on a plane at Bradford, just over the border into Pennsylvania,  change at Cleveland and then on to Columbus and meet him there.  I'd never heard of a Bradford Airport, Bradford itself being a down-at-heel  town whose main claim to fame is the Zippo cigarette lighter factory.
Still, I was game for an adventure. I made my reservations and this morning, I set off. It did not start auspiciously. For the first few miles on New York roads, I was convinced I had a flat tyre, as the car bumped and bounced along. I decided to ignore it and hope it would go away.  But then, as usual, into Pennsylvania and the bumping stopped. I breathed a sight of relief.
My next moment of panic came as I drove down the highway, past Bradford and into the depths of the countryside and not an airport in sight. I went through tiny villages clinging to the hills, old rusty oil wells, a town with about three houses called Custer City which sounded as though it had strayed from the Wild West. An enormous turkey crossed the road in front of me and a sign said "Allegheny National Forest." This had scattered rocks, spectacular  views and allegedly, a herd of elk but still no airport.  A truck pulling one of those prefabricated houses, still in its wrapping, went by the other way.
Then I finally saw a small unobtrusive sign pointing left. "Bradford Regional Airport" it said. The road was now a lane. I passed a bar with a sign saying "Welcome Hunters" and further on, another, saying, "Correctional Facility". This is politically correct Americanese for prison.  It must have been a big place, the formidable metal fence went on for miles. Then, even less encouragingly, a cemetery. My GPS robot, Samantha, announced I should turn left on "Road",   Her wits, such as they were, had evidently deserted her. But before I could yell, "Which road?" there it was, a bigger sign but not much bigger.Yup.  Bradford Regional Airport.  I drove down a track and through some open metal gates and stopped in a small car park. There wasn't a soul about.  To the right, was an old brick building that said, "Rides". 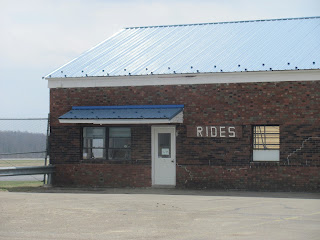 "Crikey!" I thought, wondering if I'd look a bit silly walking in there with my wheelie bag. Then I looked to the left. Aha! 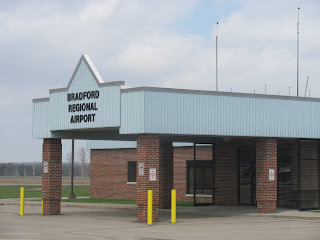 I grabbed my wheelie bag, gritted my teeth and marched towards the entrance. The wind had got up and was howling around my ears. I half expected to trip over a tumbleweed.   There was no plane in sight.