As we rolled up the motorways, past Cleveland, Ohio and Erie, Pennsylvania, it grew colder and the wind picked up. Ohio was due for a balmy weekend but we weren't going to be so lucky. And just like those attractions like waxwork museums which give you a little taster at the entrance, we rolled over the border into New York state, "Welcome to New York", and promptly hit a giant pothole. The Western New York motorways, where they exist, are notoriously atrocious. In fact I-86 is so bad that we make a cross-country detour to avoid the endless bump-bump-bump. My neighbours explain that New York City and the Albany politicians couldn't give an xxxx for WNY and its needs.
As usual there was a dearth of rest areas, though this one, with a scenic overlook on the frozen Chautauqua Lake was posher than some. 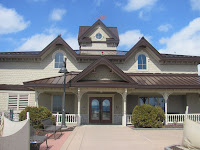 A sign pointed out that, in the old days, the frozen lake was used for ice harvesting, which gave winter employment to local farmers. The ice was known for its pure quality and was shipped ("shipped" in the American sense, meaning, in this case, transported by rail) to Buffalo, Pittsburgh and lands beyond. A nice bit of trivia: Chautauqua in the local Indian lingo - or one of them - means Bag Tied in the Middle because that's what its shape is. That is not evident in the photo. 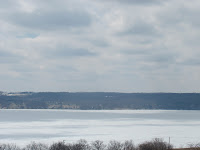 Inside, there were some interesting pseudo art deco touches 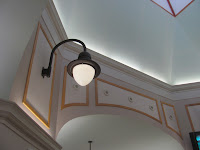 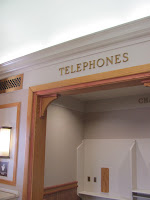 And on a warm day it would be a great place for a picnic. (Even the litter bins look posh.) 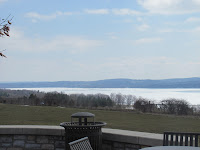 But today our teeth were chattering too much. There was hardly anyone there and in the information booth, a lady sat knitting her time away. I would suggest spending the money on more rest areas. Or give this one a nice cafe.

To find out what awaited us on our return, watch this space.
Posted by Alenka at 8:02 PM