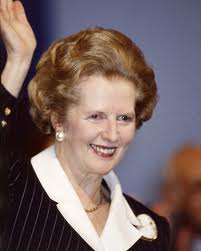 Back in 1987, when I was a fairly junior reporter for a weekly paper called The Universe, I was sent to Ten Downing Street to interview the Iron Lady.  Since the paper had a Catholic and family-oriented ethos, I was supposed to interview her about family values and such like. Downing Street demanded questions in advance and implied I was not to stray from my brief. It was interesting that Thatcher was the first of the party leaders to jump at the chance of being interviewed by Britain's biggest-selling Catholic paper in advance of the general election - when she agreed, the others had to follow suit.
When I got into Number Ten, she was sitting, flanked by a press officer and another aide ready to start up a giant tape recorder. I tentatively put my small one on the table.
"Would you like coffee?" she asked graciously and added, "I like my coffee black".
"Well I like mine white," I smiled, which wasn't true but I thought it might be my last chance to disagree with her.
I had a small trick up my sleeve. Left to my own devices, I wouldn't have done it but the editor who'd commissioned the interview, Kieron Moore, (who, in a previous existence, played Vronsky to Vivien Leigh's Anna in the 1940s version of Anna Karenina) had insisted, being a proud Irishman, that I slip in a question about alleged miscarriages of justice against the Guildford Four and the Maguire family, wrongly, as it was to turn out, convicted for roles in IRA bombings. Mentioning them was definitely not in my brief. "They've got families", had been Kieron's there's-an-end to-it argument. I didn't know whose wrath I was more in fear of, the Iron Lady's or his, if I failed in my mission. Anyway, I asked my question and she answered in her stride, if not exactly giving me a scoop.
Talking to her, I had the sense of a powerful muscle car in overdrive. When I replayed the interview afterwards, I said to myself, "Why on earth didn't you chip in there - or challenge her there?" On the clinical tape, her voice sounded so gentle. But I knew I could have no more interrupted her than stopped an Exocet missile in full flight.
After that, interviewing Labour leader Neil Kinnock and Social Democrat David Owen, was a let down. (Liberal David Steel declined, probably worried he'd be grilled about championing the Abortion Act). Kinnock briefly lost his composure and accused me of interrogating him and Owen fell asleep while I was talking. I could easily see why, in her heyday, no one could touch Maggie.
I met her again in 2002, at a book launch. She was already a little frail but the spirit was still there. I reminded her of our interview and she professed to remember, though it was probably just good manners. At the start of her speech, Denis was chatting with some friends. She walked over and chided him to be quiet,  "I must apologise for my husband!"
Sadly, here, in America, most younger people will now only know her through the execrable film, Iron Lady,  which dwelt, almost gloatingly, on her descent into dementia. It was an unforgivable intrusion on her privacy and missed so much it could have said about this remarkable person.
Posted by Alenka at 2:05 PM