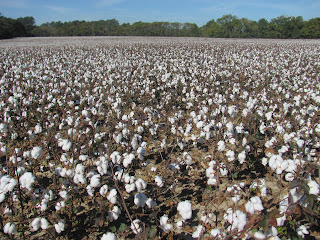 The fluffy white balls were at their peak and ripe for harvest. The first time I encountered a cotton field, I was determind to do a Scarlett O'Hara and pick some, just to say I'd done it but the stuff is not actually easy to pick. It looks soft but there's a hardness to it too and there must be a trick to prising it away from the bush. And when you've done it, you're never flippant about cotton picking again. I took some home but it's one of those souvenirs it's tricky to know what to do with. 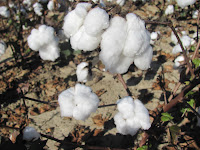 The roads were crowded, especially the Interstates, or motorways, which we tried to avoid but sometimes had to surrender to. Seemingly, everyone was heading to Florida, giant RVs and caravans powered south, some hung with bicycles and towing small vehicles behind. Coming the other way was half a manufactured home, as they call prefabs here and shortly after, the other half.  Some people's housing needs, though, are more modest. 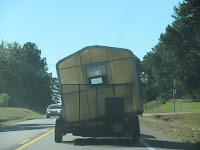 There were more little towns with railways running through them, impressive courthouses and pretty shopfronts. 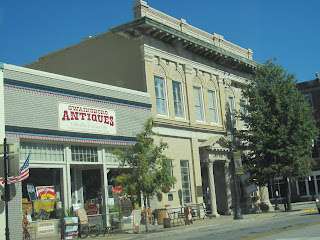 And the usual collection of roadside eateries. Chicken seems incredibly popular in the South. 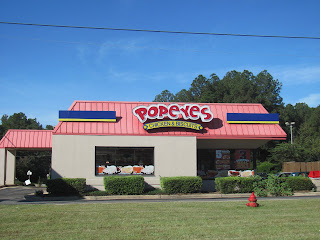 There's Kentucky Fried of course and Carters and Popeye's Chicken and Biscuits (not our biscuits, as I've observed before but scones on steroids) and countless others, one of the best known being Chick-Fil-A. You can only understand this name if you know that Americans pronounce "fillet" as "fillAY". We, however, stopped for lunch in a little town called Swainsboro, where I got my first "I love your accent!" of this particular trip.   The town was decorated with haybales for Halloween and a fountain with pink jets. I never did find out why. Incidentally, I always forget that tuna (or egg) "salad"  in America means tuna (or egg) mayonnaise and is smothered in the stuff. 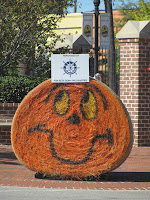 And as always there were names that beckoned and enticed:  English Eddy, Ohoopee, Santa Claus and above all the great Okefenokee Swamp and Suwanee River (or Swanee River of Stephen Foster fame).  We passed the "Okefenokee Sportsman" selling Knives and Guns and Bait and Tackle.

And finally, a little way along, there it was: 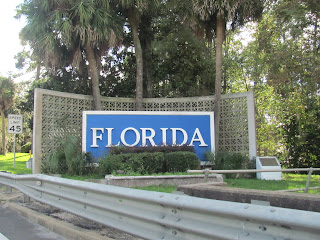