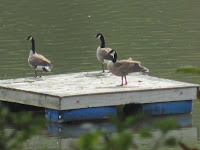 Here, in the country in Western New York we’re used to peace and quiet,  at least when our neighbour hasn’t started up his motor mower yet. But we’re also under a flight path. Not big jets, as I used to get in London, but Canada geese. At this time of year, they’re heading south. Each morning and evening, huge formations of geese make Vs in the sky above us, encouraging each other with loud honks.   Sometimes  you can even hear the rhythmic beat of their wings, almost feel the rush of air as they go by. In their meticulous symmetry, they remind me of Boat Race crews, with the coxes blaring out orders. Apparently the leaders get tired after a while and swap places with the laggards. They’ve got it all worked out.
Love them or hate them, Canada geese with their distinctive black necks, white chinstraps and grey-brown bodies are as much part of our western New York landscape as the asters and the maple trees. Their numbers had drastically diminished due to over-hunting but now they’ve put that minor setback behind them and are flourishing – and how.  There are now 200,000 Canada geese who like New York state enough to stay here and that’s not counting the migrants that use us as a stopover on their way south.  Geese just love all the trappings of modern American life, like lawns, golf courses and gardens with ornamental ponds and once they’ve taken a shine to your pond, you’re stuck with them. You see flocks of them in the fields, grazing like sheep and in the marina on Lake Erie in Buffalo they fly low over the water like the Dambusters, swim among the boats, doing a bottoms-up when they find something tasty and waddle through the car park as though they own the place.  It’s not strictly allowed to take them from the wild, though a friend of mine did raise a couple of orphan goslings from eggs, teaching them how to fly by running in front of them.  When they could fend for themselves, she released them on her pond to mingle with the wild ones already there and they flew off happily.

Geese are not universally loved since they leave an enormous mess – hubby has a horror story about a certain campsite he stayed in where you couldn’t tread anywhere for.. well, never mind. But every cause in America has its supporters and geese are no exception. 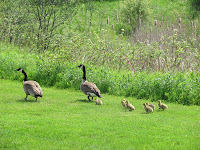 Canada geese achieved notoriety in 2009, when a bunch of them collided with US Airways flight 1549 as it took off from New York’s La Guardia airport, forcing hero Captain Chesley “Sully” Sullenberger to land in the Hudson River. All’s well that ends well in that case, except for the geese,  but then the question arose, where did the feathered miscreants come from? Were they New York residents or foreigners? Our local paper, the Buffalo News, cited some complicated research – apparently you can tell what sort of grass geese have been eating from their feathers – which concluded that the offenders were in fact Canadian aliens. Which still doesn’t solve the problem of what to do about them. You can’t exactly revoke their visas.
Well there is one solution and sadly for the geese, there is a goose hunting season. You’re not supposed to open fire around garden ponds however and the geese know it.
But I still have a soft spot for them. To me, as a former townie,  they are one of the wonders of nature.  I always remember the day we woke to the most glorious dawn. Pink, rose and orange clouds patterned the sky and I rushed out, as usual, with my camera. Then, in the stillness, came the familiar honking. I craned my neck to track their course and there, sure enough, were a couple of stragglers, beating their way south, silhouetted black against the sky. Bon voyage, lads!
Posted by Alenka at 2:47 PM