Here's part of one of the first columns I wrote when I came to America. Not much has changed. 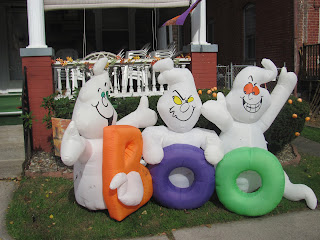 In Britain these days, Halloween has something of an image problem, seen by many as a dubious American import that’s turning innocent children into mini-racketeers and incipient satanists. But I’ve found American Halloween on its home ground rather different. Steeped as it is in fun, warmth and tradition, it’s close to the heart of every American family and absolutely non-negotiable.


My husband remembers with nostalgia his small self, in cowboy gear, terrorising his genteel suburban neighbourhood with his toy pistol, the streets milling with children in home made costumes, faces wet from apple-bobbing and cheerful and generous householders enjoying the spectacle and dishing out sweets. The main object of Halloween, he reflects hungrily, “Was to get as much candy as you possibly could…”


The festivities start early - the first signs come in September with patches of coloured plastic sheeting appearing incongruously in people’s front yards.  Amazingly, the next day, they’ve metamorphosed into fat, inflated ghosts sitting on a giant pumpkin, laughing uproariously. (Incidentally, this is the start of  Inflatable Season – in November they’ll be replaced by blow-up turkeys and in December by Santa Claus). Then there’s the witch collided with a telegraph pole, still astride her broomstick, hat at a jaunty angle and the  white-sheeted fluorescent spectres fluttering on a line between the trees. Bushes are swathed in gauze cobwebs and houses glow with orange coloured fairy lights. 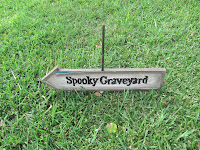 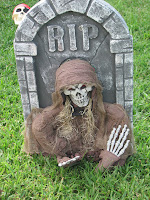 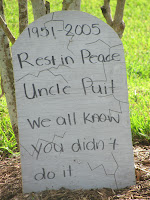 Our local town's one posh confectionary shop sells white chocolate ghouls in miniature dark chocolate coffins. And – Come if You Dare - the Nightmare Hay Rides get into gear. Now I have to confess I have not yet been on a Nightmare Hayride – but I also have to confess that I’m tempted. This is a 25 minute night-time tractor ride in a local farm field (turn left at the Kwik Fill Gas Station)  and claims it’s the “scariest haunted attraction in western New York”. The most intriguing bit is the guarantee that “ you will end up sitting in the persons (sic) lap next to you.” Perhaps I can persuade my husband to accompany me. We can always recover in the cookshack, with its offering of “spooktacular food”.  Oh and under 3’s go free.


Meanwhile, the local party shop is busy selling costumes – while I draw the line at dressing up as a Zombie Prom Queen,  the plug-and-socket ensemble for a couple sounds exciting and if you’re so inclined, you can buy a Darth Vader costume for your dog.   My favourite object in the shop is the self-inflate cling on gargoyle in a fetching shade of grey. I’m just wondering where I could perch it.


Amid the hundreds of Halloween recipes, magazines offer advice for the weight conscious: “Make sure you buy the sort of candy for the kids that you don’t like yourself.” Now hang on a minute…. 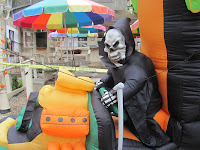 Inevitably of course, locals complain that things aint what they used to be. Some places now have curfews, with trick-or-treating only allowed between 6 and 8 pm. There are moves towards having organized parties rather than free-for-all house visiting, understandable perhaps, given the rumours of razor blades in the candy handed out in some of the murkier inner cities. There is a dark side to the fun, even here.


But it’s the creeping – or rather galloping - commercialisation that gets the most grumbles. Friends with young children say there’s now far too much buying of flashy costumes, often TV inspired, rather than making your own.  One mother was reduced to tears because some website had run out of the ready-made ladybird outfit her toddler had set her heart on.   People used to enjoy making a hash of carving pumpkins into Jack o’Lanterns – the more lopsided the funnier – but now they can buy designer carving kits with stencils of elaborate moonlit scenes that somehow miss the point.

But it still remains the biggest fun-fest in America after Christmas.

Trouble is, we don't have trick-or-treaters here on our rural lane. I used to stock up with sweets and chocolates, put the light on in the porch, which is the done thing. Once even, a guest we had went to all the trouble of dressing up as the Grim Reaper to hand out the goodies. But not a singe child has beaten a path to our door. No, they get their parents to drive them into town, where the houses are closer together and pickings richer. Huh. 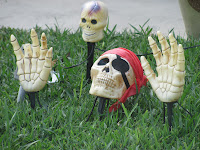