Two great rivers, the Shenandoah and the Potomac join up at Harper's Ferry, West Virginia, resulting in some seriously spectacular scenery, even on a murky day. And yes, there was a Harper and there was a ferry back in the day, followed by great stone mills, arms factories and railways and a Civil War battle where the northerners were thrashed.and had to surrender more than 12,000 men, the largest US surrender until World War Two. 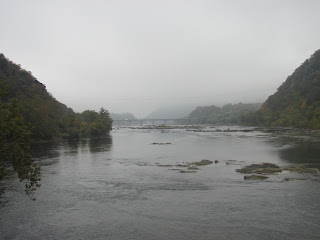 The town was levelled , save for the Catholic church, where the canny priest flew the neutral Union Jack.  The town was levelled again, many times, by ferocious floods, so they gave up on industry, did up the place and turned it into a tourist trap, sorry, National Park, only accessible for car drivers by shuttle bus from the Visitor Centre. Not that it isn't worth seeing, you understand. 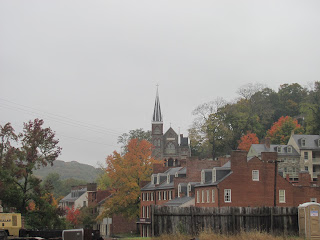 With its stone buildings and stone walls it's almost like a small town in the Welsh mountains, or the Yorkshire Dales. I got talking to a local in the bookshop, who agreed. "I love living here because it reminds me of Britain - not like America at all". My patriotic American sister-in-law wasn't best pleased. There are some American touches, though. 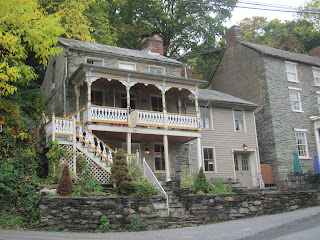 But Harper's Ferry is probably most famous for the raid of the anti-slavery campaigner, John Brown, he of Glory,Glory Hallelujah fame, on the armoury in 1859.  Not much left of the building now: 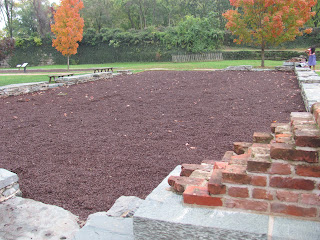 Though you can see the fire station where John Brown and his men holed up. It must count as one of the most moved-around buildings in America, finally ending up a few yards from its original site. 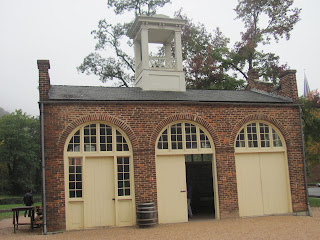 Hordes of schoolchildren, some in costume, were wandering around, doing historical role-play. One bunch, evidently being brainwashed with the West Virginia version of the Civil War (which is different from being brainwashed with the Virginia version of the civil War) were yelling "Separate! Separate!" I was a bit puzzled at this, until I remembered that West Virginia split from Virginia to form another pro-Union state.  Things have been a bit edgy between the two states ever since. 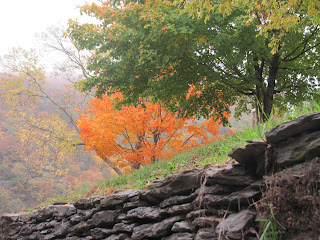 Perhaps because of its troubled and rather moving history, I thought it was most appropriate to see Harper's Ferry on a dark, gloomy day. It must be gorgeous in sunshine, though.
Posted by Alenka at 8:06 AM