Our white-knuckle landing at Buffalo Airport reminded me that it wasn't the direst October weather the city had seen. Just over six years ago, it was much, much worse. Here's part of what I wrote at the time. 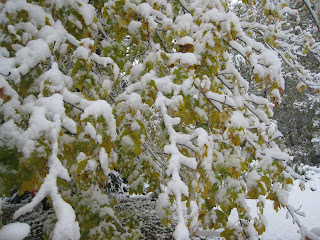 On the morning, appropriately, of Friday the thirteenth of October, our nearest large city, Buffalo, woke up to a nightmare. A freak snowstorm, the result of “lake effect” - cold air from Canada blowing over the warm surface of Lake Erie, hurtled through the night, coupled with high winds, hail and, incredibly, thunder and lightning. By the morning, in some places, as many as ninety percent of the trees had toppled, brought down by the weight of snow on branches still carrying their bright autumn foliage. There was something abnormal about it, observers said, a sense that things had gone against nature.
The trees fell on houses, cars, roads. Most of all they crashed onto electric cables, leaving them dangling dangerously and depriving nearly four hundred thousand homes and businesses of power.
Our friends, who live in one of the worst hit areas, herded their children into the basement and cowered there, terrified, as something resembling the Battle of Stalingrad thundered overhead. They were lucky – a tree destroyed their greenhouse but not their home.
In the morning, there was a panicked rush for generators, which sold out in minutes. A lot of people didn’t know how to use them. Electrical workers had to stop a man pouring petrol into one while it was running. Among the 13 deaths so far caused by the storm and its aftermath of torrential rain and flooding have been victims of carbon monoxide poisoning from poorly ventilated generators. Another was a teenage boy mown down by a skidding truck. A woman died when her oxygen machine lost power.
For days, cables still trailed everywhere, the live ones marked by yellow stickers, traffic lights were out and schools closed. Debris piled on the pavements made it dangerous to walk. The Bishop of Buffalo issued a dispensation for missing Sunday Mass (though the Saturday night hockey game had managed a full house. ) It took ten days for many people to get their power back, electricity workers coming in from as far afield as Massachusetts, beleaguered Buffalonians cheering the convoys of cherry-picker trucks as they drove by.

It was a strange experience for people so used to computers, cable television and every modern comfort. The Buffalo paper became a repository of horror stories. “We were transformed into cold, miserable prisoners in our own homes. We read the newspaper by flashlight, bundled under covers ..”, wrote one resident, his words echoed by a psychologist, “ All of the things normally available to us to relax and escape are removed…..Tensions build up without the usual releases.” A woman described how she scooped a hundred buckets of water an hour out of her flooded basement until a neighbour came to her rescue with a pump.
Buffalo is notorious for nasty weather, particularly snow – but not in October, for goodness’ sake! The once wealthy city has been down on its luck for years. Its traditional industries are moribund, the fans of its beloved football team, the Buffalo Bills, epitomise the triumph of hope over experience. But it does have one thing - a great reputation for neighbourliness.
And many people said that the disaster had brought them closer together, snuggling up by candlelight, talking to each other instead of watching TV. One teenager remarked: “I never truly saw "The City of Good Neighbours" in action until this weekend. ..It's because we all had something in common…..people shovelled each others' driveways. Neighbours brought each other food. …”
Churches opened soup kitchens. Hundreds of university students volunteered to help the National Guard remove debris.
A ten year old boy called Eric earned himself the title, “the Little Samaritan”. He dressed up as a fireman, picked up a miniature saw and went to help elderly neighbours trim trees and clear pavements. He wouldn’t accept money.
Most extraordinarily a statue of Jesus Christ outside a school survived undamaged in a sea of fallen trees. Except, that is, for two branches that fell onto His shoulder and lodged there in the shape of a cross. It became a place of pilgrimage for people who’ll always now be reminded of their human fragility.

And six years' on, at Buffalo Marina, here's what happened to some of the fallen trees....... 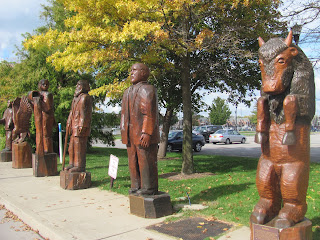