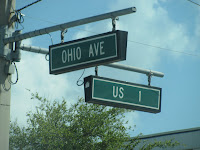 ...which is not at all like driving in West Virginia. The roads are straight. The roads are flat. You haven't seen flat until you've seen Florida. Though the cars are often prettier. 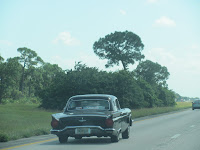 The roads have six, eight lanes and run through endless urban sprawl, fringed with billboards, car showrooms,  fast food outlets, the Country Estates Trailer Park, the Alpine Village (you couldn't think of a less appropriate name for Florida) Senior Community and suchlike - except for the bit where we went through the centre, east to west, from the Atlantic coast to the Gulf coast, leaving the incipient hurricane Sandy behind, though the skies were glowering and the wind blowing. Through the centre and over the top of the vast Lake Okeechobee, the roads were still flat and straight but bordered by orange plantations and endless cattle ranches. . 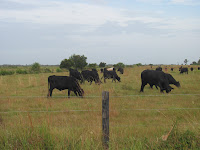 But there were palm trees, as there are all over Florida (apparently a pain to have in your garden as they shed dry fronds that need clearing up on an industrial scale and sometimes rotting fruit that attracts flies...) 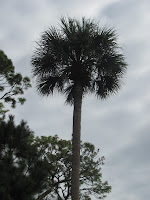 And there were live oaks, like so many Miss Havishams, veiled in ethereal Spanish moss, an odd, dry parasite that looks much more beautiful from afar than it does up close. 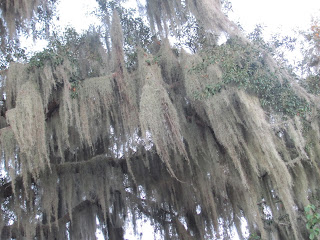 And the roads had ditches running alongside them - prime alligator-spotting territory in this land that was once one huge swamp. Though they say that the best place to spot an alligator in Florida is on a golf course.
Posted by Alenka at 6:05 PM