After happily meandering around the two Virginias, sister-in-law and I have finally turned south. We are in South Carolina, home of the exquisite coastal city of Charleston, of Rhett Butler fame, which we visited on a previous trip. This time we're sticking, where possible, to country lanes. Though, on our way south,  we have gone through the smallish towns, where languid porched and columned houses give a hint of what people here call the "Antebellum" days. 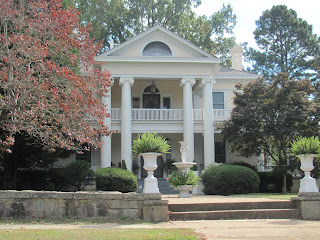 The towns have railways running through them - mainly unused these days and sometimes a former station. They have picturesque but often empty and rather desolate Main Streets and usually, as with most American towns,  a grandiose courthouse.
(Interestingly, there have been few Presidential election sign this trip, though many for local officials, also contesting on 6th November. Those there are are mainly for Romney-Ryan. But then we have been in the countryside.)
The countryside has changed, from roads winding through mountains, to roads running straight through trees, peach orchards and groves of pecan trees. The earth is red now and the sugar maples are giving way to live oaks and giant magnolias.
We looked in vain for stands selling peaches; the season must be long over. 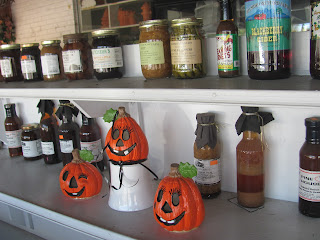 The only stand open had watermelons, dusty bottles of pickles and vinegar and, unaccountably, a box of old sunglasses. 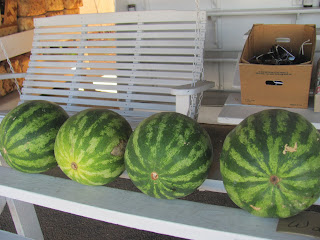 It also sold boiled green peanuts. These are the South's Revenge. Northerners are intrigued by the signs for them everywhere, buy some and then realise, too late, how soggy and disgusting they are.
This is a land where people say, "Ma'am" and "Y'all have a good day",  even if they're addressing you alone.
We have stopped looking out for bears because soon we'll be spotting something else: alligators.
Posted by Alenka at 8:49 AM