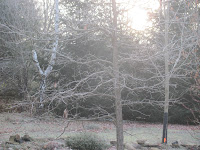 The Morning after the Night Before and many of my neighbours will probably be shrugging their shoulders philosophically and getting on with their lives.  Not that the election result was unexpected and as I've said before Cattaraugus County is not New York City, which usually decides which way New York votes.
So far I haven't spoken to any locals, apart from the neighbours' cat who seemed remarkably cheerful. I had assumed she would not be giving the President her vote as he is a known dog owner but she is a dark horse.
Oh and hubby tells me they don't have the one-armed bandit voting machines any more but slips of paper you scan into a computer, rather like a fax machine. They can't leave well alone, he laments.
Posted by Alenka at 8:23 AM