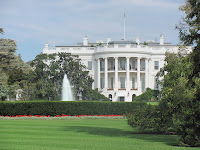 Stop Press: Seen in the doctors' surgery, stuck on a table in reception, a yellow post it note saying, "Defend Freedom. Defeat Obama. Vote November 6th".   Things are hotting up.

Last time there was a Presidential election,  I went with hubby to the American equivalent of the polling station, in our case, the village Firemen’s Hall,  just to see how it was done.  It was all rather friendly and casual and I, a “resident alien”,  felt I could almost have sneaked  into the booth and cast my vote,  except the smiling ladies sitting behind the table crossing off people’s names would have nabbed me in time. In a small community, everybody knows everybody. "And", hubby pointed out, "You'd be arrested".
In the previous election,  our local citizenry voted  by means of old-fashioned clunky levers,  which had to be yanked like a one-armed bandit.   I don’t know if they'll still have them but hubby had a point when he remarked that at least they  worked.  There wasn’t much to go wrong, unlike using computers,  or those paper-punching gadgets that misfired and caused such confusion in 2000.
I’m still no nearer to  predicting the victor.  Our rural backwater isn’t typical of New York state but  I've noticed precisely two (correction: one. The other one disappeared)  Vote Obama signs on my route to the Post Office.  And as I've noted  before, the "America vs Obama" signs have been proliferating.  And despite the rather un-American emphasis, in this election campaign, on "rich versus poor" , those putting them up aren’t billionaires. Far from it.  Many of them are among the poorest people in the state, living in dilapidated peeling-paint farmhouses and trailers.  It  could be because they still have some of the old pioneer spirit and are wary of too much government interference.  It could be because country people are more socially conservative. Whatever the reason,  anyone who labels Mitt Romney’s appeal as only for the rich would do well to take note.  And there were some resonances on my road trip down south. (In 2004, when George W. Bush won, many of my London friends, conditioned by chattering-class media ethos,  seemed flabbergasted. "How could this have happened?" Living here, I know exactly how it happened).
More than ever, this election seems to be about differing visions of America.  The free-enterprise America of the pioneers, (remember the  "Liberty Bus" that went down rather well here) or an America with an increased role for government,  more on the European model.  Something that my conservative neighbours call  socialism and Obama supporters call  fairness.
One hot potato around here is "Obamacare". Should the government order people to have medical insurance and provide it for their employees?  Many Americans just don't get the NHS. They're horrified at the idea of overnment involvement in such personal decisions.

"Why should I go to jail for not paying for health insurance when I can't even afford it!" one neighbour  I talked to today fairly spat.  She said she could only afford to see the doctor for a check up twice a year but reckoned the Obama reforms were not going to help her. I asked her if she was voting, without exactly asking which way. "Well I'm not voting for Obama", she volunteered, "No way!"  A staunch churchgoer, she remarked that her minister's wife had speculated on the cost of Michelle Obama's  shoes, when the First Lady  went to visit some poor folk. "Probably cost at least 500 dollars!" Right or wrong, on such seemingly small things are decisions sometimes made. 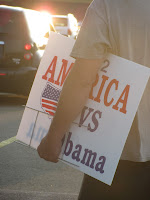 Catholics too (a quarter of the electorate), or at least the Catholic Bishops,  have been fighting Obamacare for their own reasons - the compulsory payment - directly or indirectly - for medical insurance which includes contraception and the morning-after pill.
This is a country where religious and moral issues matter hugely in politics. More than someone from Britain could ever fathom. The other day, I was following a pickup trick. It had an array of bumper stickers saying, “I’m Catholic and I Vote”, “Repeal Obamacare” and “Mitt”. Fairly typical for our neck of the woods. But the Catholic Church in America is polarised. I suspect many will still vote for Obama.
And I have American friends all over the country, of many religious persuasions and none, who are staunch Obama supporters.
In the end, the way Cattaraugus County citizens vote will probably not affect the way New York state votes.  Over the country as a whole, they may be part of a vast, silent majority that hasn't spoken yet.  Or, on the other hand, they may not.
Posted by Alenka at 12:42 PM