A Strange Year for Apples

The great New York apples are now filling the supermarket shelves. After a summer of suffering through last year’s mushy remainders and bland imports from Chile, we can at last get our teeth into the sweet Cortlands, the McIntoshes, the Empires, the Paula Reds. They lie in trays, waxed and polished to within an inch of their lives. I'd rather have them in their natural state. 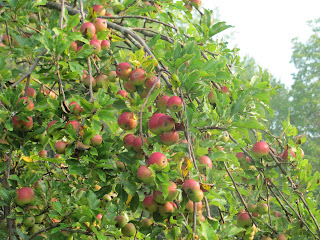 Apples seem to have an iconic role in America. They’re a symbol of patriotism and prosperity, hence “American as apple pie”, or indeed “Motherhood and Apple Pie’, which was what American soldiers apparently fought for in World War Two. New York City is the “Big Apple” and then there is Johnny Appleseed, who looked a bit like Abraham Lincoln on a bad hair day and is said to have wandered around the old frontier, barefoot and dressed in rags, singing “The Lord is Good to Me” and planting apple trees. In some depictions, he wears a cooking pot on his head . (There actually was a historical Johnny Appleseed, whose real name was John Chapman, though he apparently established nurseries, rather than planting haphazardly).
For all I know, Johnny may have swung by our way because one of the wonders of our rural Western New York landscape is that there are apple trees everywhere. I’m not just talking commercial orchards but the many old, gnarled apple trees, appearing unexpectedly in the middle of the forest, left behind after the first homesteaders upped sticks and moved away to better farmland further west. You can spot them in the spring, with their blossoms like a white mist, peeking through the still-bare branches and even more so in the autumn, as the apples ripen red.
One of my first memorable experiences in western New York was exploring the steep old stone tracks and logging trails up through the woods behind our house. It was a clear, sunny autumn day, asters and goldenrod were flowering and everywhere there was the “plop-plop” sound of apples falling. 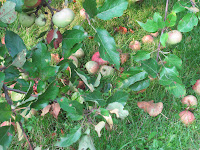 When I get the chance to ride up into the hills, we pass forgotten orchards, sometimes near the stone foundations of an abandoned farmhouse. In good times, the apples are there for the grabbing – small but with a pretty good flavour and the horses enjoy them too, as do the white tail deer , who find chomping on them a valuable source for their winter vitamins.
Last year, fallen apples lay so thick on the ground, with their colours of red, green and gold,they looked like rich Byzantine mosaics – and you could pick up the pungent, cidery scent from a long way off. And although we're lazy about pruning the several trees that dot our jungle (many of which we only discovered after we cut down some of the jungle) , we had an extraordinary crop. 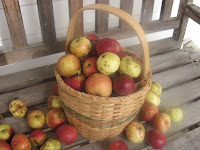 So good, in fact, that I had no excuse not to make a proper American apple pie, a somewhat nerve-wracking exercise for a foreigner, though it seemed to work. 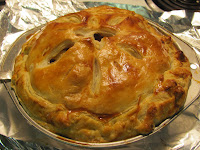 But this year, something strange happened. It may have been the bizarrely warm winter, which sent the buds sprouting too early, only to get zapped by the April frosts. Perhaps the trees  had simply exhausted themselves. But we didn't get a single apple on our land. Though, evidently, others had better luck. And to think that last year, we couldn't even pick them all before the first snow came. 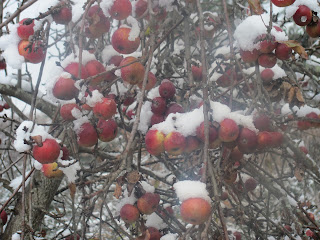