It started during the night and by the morning we heard the slow rumble of the snowplough going up the lane, spewing salt and grit like some monster risen from the deep.  In a few hours, our world was white. 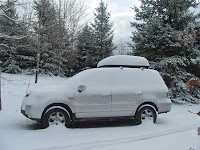 On thursday, our Thanksgiving houseparty had been out playing croquet  in the sun. Today, we had to think of something different. 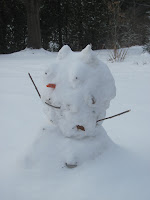 Suggestions for a walk up the lane (not in the woods; it's still hunting season) meant a frantic search for snowboots and woolly hats.  The wind was blowing and froze the back of my head, the electric orange hat not being quite as woolly as I'd thought.  Here and there, we heard a distant shot.
One of our guests, stepping out for a late night cigar, said he'd heard coyotes crying up in the hills. 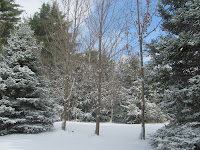 Is that a sign of a hard winter to come? If it isn't it, should be.  In town, the cars were skidding - typical for early snow that quickly turns to slush.  I 'm starting to wish I was back in Florida.
Posted by Alenka at 3:51 PM